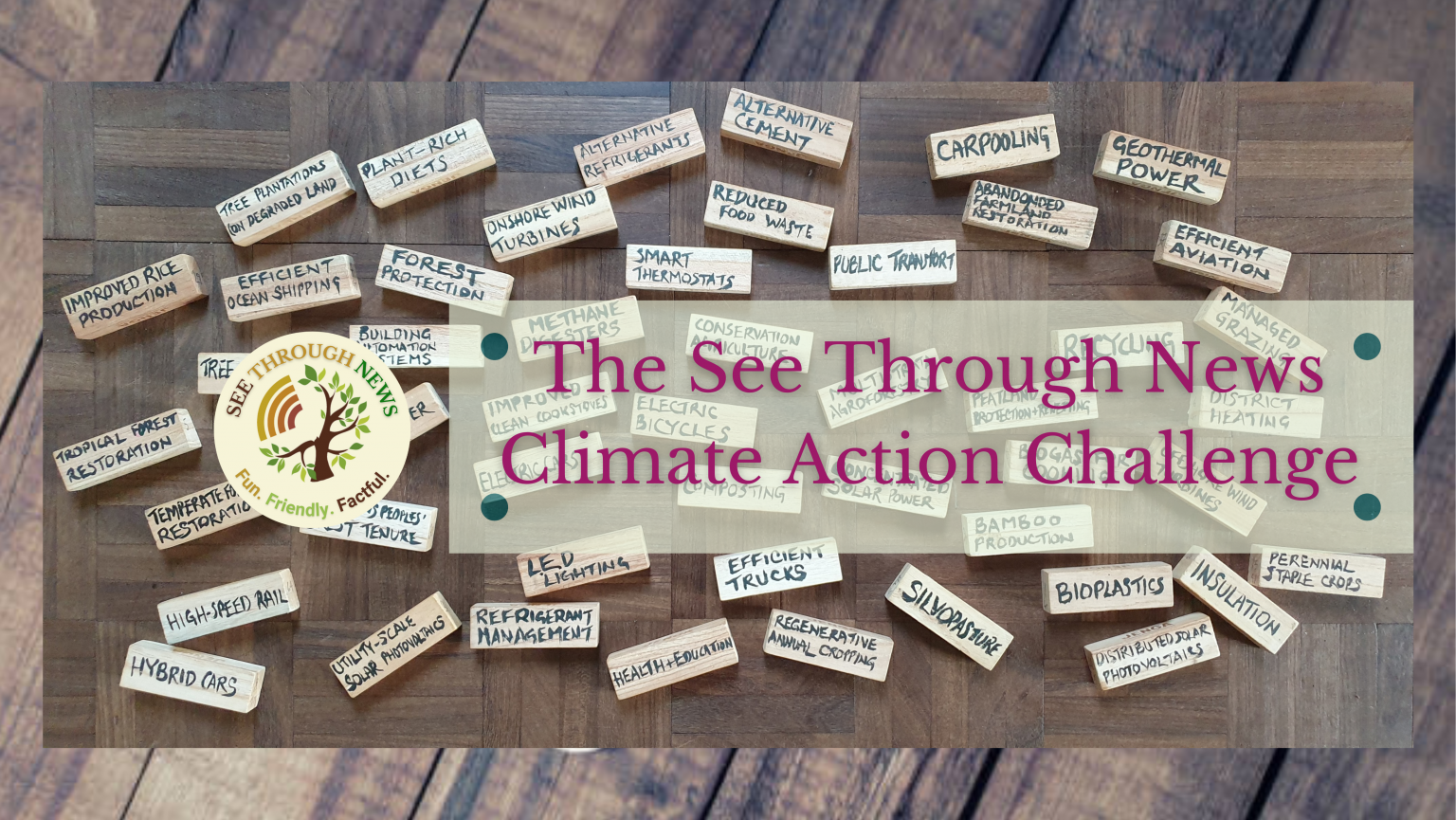 The 2nd of our suite of 3 video games to speed up carbon drawdown has right and wrong answers, based on Project Drawdown’s Table of Solutions

The Think Game is designed to stimulate thought, but seeks only opinions. As we discovered in the first field trial after the re-brand, it left players wanting to know more, wondering if their answers had been correct.

In other words, begging to play The Learn Game. So far, so good, and just as planned.

Unlike The Think Game, The Learn Game does have Right and Wrong answers.

They come from Project Drawdown’s Table of Solutions. This ranking of dozens of carbon reduction methods based on the volume of carbon they remove or reduce forms the basis not just for this game, but for much of See Through News’s thinking on how to shift public focus from individual behaviours to government regulation.

Rules of The Learn Game

The Learn Game can be played solo, but this Real World pilot version is best suited to 2-3 players.

The better the players know each other, the more layers of potential subtextual psychodrama:

We append the full draft script below, but after being appraised of the rules, the players:

When they’ve had enough guessing and working out, the players learn how their score was calculated. The maximum score is 15, calculated as follows:

There are many possibilities for gamifying this discovery process. The pilot video below does this by providing two concealed numbers on each option:

It’s up to the players to work out which is which.

Our pilot trials suggest this process is highly engaging.

Our experience is that at first the players are highly motivated by the scoring, but as the game progresses they become less concerned about the competitive aspect of the game, and more interested in the real-world problems – and solutions – that form the core of The Learn Game.

This created the opportunity to make the major point we’re trying to educate the public about.

When the time is right, we ask the players to predict how many of the Top 20 carbon reduction options listed in the Table of Solutions are within the power of them as individuals to affect (e.g. eating less meat, or recycling), and how many can only be acheived through government regulation, policy, enforcement and investment (e.g. high-speed rail).

Most are shocked to discover individual behaviour change can, at best, contribute less than 10% of the required carbon reductions set out by the IPCC, i.e. only 2 of the Top 20, and lower-ranked ones at that.

Next – The Act Game

At this point, the players are primed to be given a clear call to action. Rather than despair at their impotence, we can give them the positive alternative of…

The 30″ Challenge is now under development by an international team of volunteers. Beta testing of the real-world version is in progress.

If you’d like to get involved as a developer or subject, please email:

Thanks for agreeing to play The Learn Game.

We’re videoing this to put online, but if for any reason you change your mind at any point, we’ll delete it in front of you, no questions asked. OK?

The Learn Game is based on a Table of Solutions drawn up by Project Drawdown.

Project Drawdown is a group of world expert engineers and scientists.

So No. 1 in their Table of Solutions would result in the biggest reduction in average global temperature, No. 2 the next biggest, & so on.

For this Challenge, we’re using their estimates for limiting global temperature rise to 2 degrees C by the year 2100 – when a baby today would be in their late 70s.

So here’s how the Challenge works.

In a moment we start some countdown music. After the first note, you have 60 seconds to write down your predictions of what you think the Top Five solutions might be, ranked 1-5.

When the 60 seconds of discussion have elapsed, you can then remove the lid to the box in front of you.

Inside are 15 wooden blocks, each marked with a different carbon reduction solution.

These 15 blocks include the actual Top 5 ways to speed up carbon drawdown, as calculated by world expert scientists.

Now you have another 60” to pick 5 blocks, and arrange them in the right order.

We’ll then give you your score:

For a maximum score of 100 points.

Any questions?  Are you ready? The 15 solutions are hidden here, and your first 60 seconds of prediction time before we reveal them starts….now!

* While our international team of volunteers develops the online version of The Learn Game, here’s a simpler version, which we’ve called GRIBbage, that only requires paper, pencil, and access to Project Drawdown’s Table of Solutions.