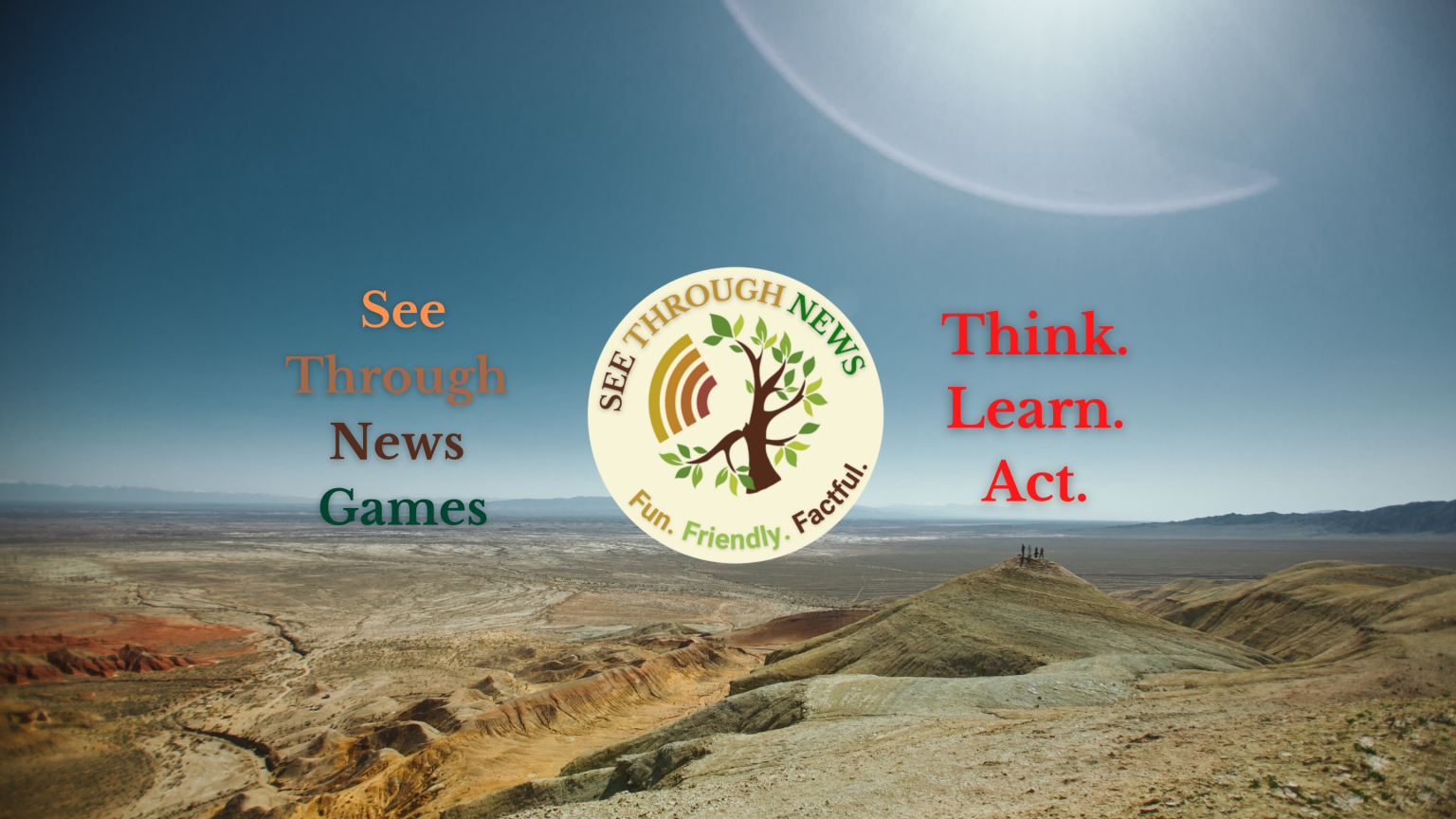 The 1st of a suite of 3 games developed by See Through News to promote effective climate action, and measurably reduce carbon

[See this article for an overview of all three games].

The Think Game, currently under development:

This YouTube Playlist on our See Through News YouTube channel has dozens of videos of the real-world version. You can also see them on our TikTok channel.

As you scroll down the videos, you’ll see the concept, execution and production values evolve. Some selected highlights:

There are dozens more videos, each engaging, compelling, and unique. And each contributing another addition to The Think Game dataset.

Because The Think Game has other purposes, beyond being a good laugh, making individuals think a bit harder about what effective climate activism is than they had 60 seconds before.

The Think Game is also:

Here’s a link to our draft format bible and scripts for the Real World version of The Think Game.

This game was originally called the See Through News Climate Activism 60″ Challenge, but we re-branded it as The Think Game after coming up with The Learn Game, which does have Right and Wrong answers, and The Act Game – the final link of the chain, and the one which leads to measurable carbon reduction.

We explain the powerful and logical links between the three games in more detail elsewhere, but its first outing was a huge success.

We played The Think Game in Finchley, north London as part of our 1 Sunday Morning, 4 Films project.

Here’s a highlight reel from our YouTube Channel. If you check The Think Game Playlist, you’ll find the uncut versions, with all the answers to all the questions.

The rebranding really seemed to work, as:

This is despite (or possibly because of) the fact that our script stresses that The Think Game has no right or wrong answers, the scale they used was entirely of their own making, and that we sought their opinions only.

So, essentially, they were all begging to play The Learn Game, which is still under development, but won’t be far behind.

Most people, after all, have to think before they can learn. And as the final player in the highlight video implies when expressing her reticence to join Extinction Rebellion, we generally need to learn before we’re ready to act.

An online video game is currently under development by an international team of volunteers.

It aims to replicate the gameshow tension and interactive fun of the real-world version, with the scale advantages related to mass data capture offered by a virtual version.

The game is designed to be a fun way to make us think about our understanding of ‘climate activism’, but the data generated has also proved to be of significant commercial interest to consumer brands.

What Will See Through News Do With The Data?

The 5 stages are summarised above.

There are three ways to capture the data.

The Real World version is the prototype you can see on our YouTube channel. It’s very effective at generating engagement, but an inefficient way to acquiring data. It requires one or two people, a sophisticated audio-visual set-up, and around 10 minutes to capture one data set.

The Live Version, trialled using the sli.do interface, is also highly engaging, but much more efficient at capturing data. In 10 minutes, a facilitator/game-show host can capture as many data sets as there are people in the audience with mobile phones who join the session via a QR code.

The Online Version, currently under development, is highly effective at data capture, as it can operate without human intervention at the scale of The Internet. If we can successfully replicate the fun, excitement and drama of the Real World and Live versions in the Online one, this could rapidly multiply the size of the dataset by orders or magnitude.

The demographic and quantitative data can be interrogated by standard statistical analysis. While the dataset itself it relatively simple, the scale and interconnectedness will offer rich granularity and opportunities for identifying correlations that might not be intuitive or obvious.

The qualitative data entries can be subjected to more sophisticated and revealing sentiment analysis. This will provide a useful benchmark to measure progress in general understanding of effective climate action (e.g., how many of the responses focus on individual behaviour rather than government regulation).

See Through News will publish and promote Best and Worst rankings for sectors such as countries, celebrities, organisations, consumer-facing companies and brands.

While these will of course only represent public perception of their green credentials, rather than any objective, evidence-based, assessment, we hope these rankings, if well promoted, will over time induce those at the bottom to rise to the top by reducing the amount of carbon they produce, rather than improving their greenwashing.

True to the See Through News principle of radical transparency, all data will be publicly available, on a Creative Commons basis.

With sufficient scale, and quality of data analysis, it may be possible to monetise our data visualisation and analysis services for individual, countries, institutions, charities, corporations and brands.

While all our video games will be developed on a voluntary, zero-budget basis, any resulting revenue would be used on a non-profit basis to promote the See Through News Goal. See our Money FAQ for details.

How Does The Think Game Work?

Here’s a graphic showing the design concept of The Think Game. It forms the basis of a GitHub Repo currently being set up by an international team of See Through News volunteers.

When we’ve completed the Minimal Viable Project (MVP) prototype, we’ll welcome volunteers to crowdsource the development of the game to scale as rapidly as possible for zero budget.

To ask about joining the development team volunteers, email:

If you see the commercial potential for adding your brand to the list of questions, and being provided with the relevant data, email: