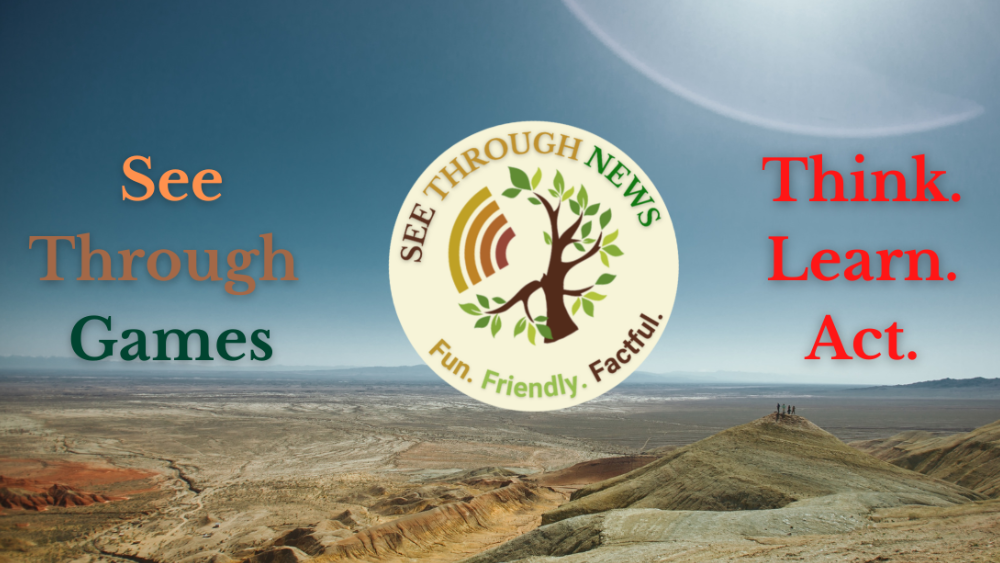 See Through News suite of games to speed up carbon drawdown, and move the Inactive towards effective climate action

See Through News applies its storytelling methodology to a wide variety of apparently diverse projects. At first sight, the links between superhero drawing competitions, bleeding-edge AI projects and bedtime story podcasts might not seem obvious.

They may start from different points of engagement, but these projects all lead to the same Goal of Speeding Up Carbon Drawdown by Helping the Inactive Become Active, and are designed to be:

It turns out that loads of people play video games.

So we’re developing a suite of three video games to further our Goal by measurably reducing carbon.

Free and open source, these games are based on the following rationale:

That’s the logic, then, behind The Think Game, The Learn Game and The Act Game.

The Think Game (formerly The See Through News 60” Climate Activism Challenge) asks players to give a score between 0 and 10 to an apparently random list of 15 names of countries, brands, individuals and organisations, within 60 seconds. All they’re told is that zero represents the worst climate inactivism, and 10 the best climate activism.

How they come up with that number is based entirely on their own opinions and personal measuring stick. Before the clock starts, we ask some basic questions about where they’re from, the year they were born, and what they do. After the 15 questions, we ask them what metrics they used to arrive at their scores, and which country/brand/individual/organisation would have received their top score.

There are no right or wrong answers, but through its fun, tense, engaging game-show format, The Think Game gets people thinking about what climate activism means.

The Think Game data tells us most people think of climate activism in terms of their Individual Behaviour.

Ask anyone, as we do, to rate their own climate activism, and you hear a familiar checklist of Individual Actions: recycling, electric vehicles, litter-picking.

Admirable and beneficial though these individual actions may be, the inconvenient truth is that on their own, they barely put a dent into reducing atmospheric carbon.

By thinking about this issue in a different (but fun!) way, we make players of The Think Game want to know the real answers. The Facts. The Right and Wrong answers.

In other words, they’re now primed to play…

The Learn Game provides these answers, based on the calculations of Project Drawdown.

We’ve yet to meet anyone who isn’t shocked by how far off their estimates are. This includes the world’s most active climate activists attending COP 26.

The Learn Game reveals that what they thought was effective, is in fact relatively ineffective at carbon reduction. It shows them that the most effective actions are things they’ve not even heard of.

Most critically of all, the game leads them to the reality that if every individual were to do everything in their power to reduce carbon overnight, it would get us less than 10% of where we need to get to mitigate the worst impacts of climate change.

i.e., the other 90+% requires Government Regulation.

Government Regulation can make massive changes overnight. Even in the most despotic regimes, ‘Government’ is not an abstract monolith, impervious to influence.  At some level, anyone in power knows the more they ignore the Will of the People, the more precarious their hold on power is.

Directing more of our time to changing Government Regulation – at any level from local to international – is orders of magnitude more effective than shrugging our shoulders and/or do nothing more than recycle and litter-pick.

This point is made with another free game GRIBbage, which requires only paper and pencil, but the next step that can measurably reduce atmoshpheric carbon is…

The Act Game is a pub-located 80’s-style pixel-art game that’s designed provide an answer when, after discussing any climate issue, someone shrugs their shoulders and asks – rhetorically – ‘Yes, but what can we actually do about it?’.

The Act Game’s interface, like its companion games, is fun, engaging and easy. But The Act Game is the serious, pointy-end of the whole project. It’s the part that speeds up carbon drawdown, and produces a measurable outcome, in the form of the number of people who email their political representative to inform them they definitely won’t vote for them if they fail to vote to include a specific, measurably carbon-reducing clause, in a specific piece of upcoming legislation.

Thinking and Learning are essential preconditions to Acting, but do nothing to reducing the number of carbon-based molecules trapping heat in our atmosphere.

It’s why See Through News’s focus is relentlessly on atmospheric physics, and the only test we’re really interested in is whether what we do will result in carbon reduction.

‘Raising Awareness’ (=Thinking) and Educating (=Learning] are important, but only if they lead to Acting.