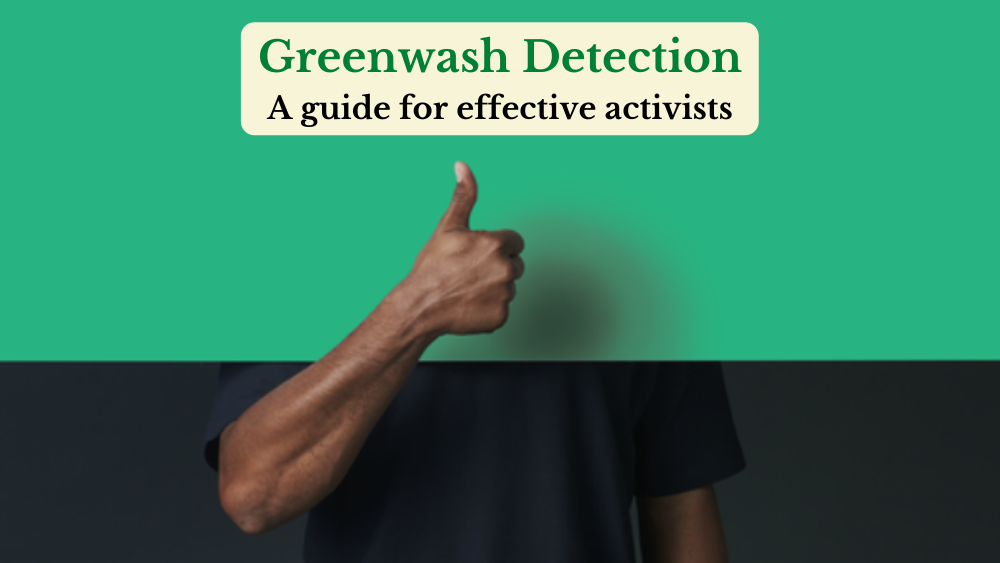 We’re becoming more attuned to corporate ‘greenwash’, the practice of pretending to be carbon-conscious or environmentally-friendly when you’re not. For a start, you don’t have to explain the word ‘greenwash’ so much these days.

As the gap between the rhetoric and practice of climate action grows wider, business bullshit gets whiffier and easier to detect.

But even as they’re finding it harder to hoodwink us, Big Oil, supermarkets, airlines and other carbon-intensive industries still spend more time and effort into pretending to reduce carbon, than into reducing it.

See Through News often references our Three-Headed Beasts allegory to help explain what stands between us and carbon drawdown.

The Business Head has long used advertising professionals and behavioural psychology to divert our attention from their actual carbon emissions.

The Media Head has been a willing accomplice in magnifying the Business Head’s sleight-of-hand conjuring tricks. Look at who owns major Media outlets, and the distinction between Business and Media blurs – a growing proportion of mainstream and social media is owned by billionaires who benefit from the status quo, and hence resist change.

This article addresses the Government Head, offering 5 Top Tips on how to sniff its particular flavour of environmental bullshit.

By all means bookmark it for whenever there’s an international climate conference.

The Government Head of the Beast, nominally, has the power, via regulation and enforcement, to tell the Business and Media Heads what to do. This gives Government greenwash its own hue.

Business and Media have to play by the rules. The Government sets the rules.

Unfortunately, the power dynamics of realpolitik complicate this. As our allegory has it, the Government, Business and Media Heads of the Beast are linked below the neck by Power, and below the waist to other Three-Headed Beasts, all wallowing in the Money Mire.

Governments around the world, whether ‘democratic’ or ‘autocratic’, are to some degree or other, controlled by Business and Media. Their degree of control constrains Government’s capacity to tell the others what to do.

If government regulation is our shortest route to carbon reduction, we need to develop a nose for government greenwash.

This article is a practical user’s guide to government greenwash detection.

This is the headline of our case study, an announcement from the UK’s Environment Ministry ahead of COP27.

The UK, for historical reasons, has a particular obsession about being seen as ‘world-leading’, but most governments deploy the same tricks most of the time. Here’s the full text. The highlights are ours:

The Environment Secretary has today started talks with businesses, environmental groups, scientists and civil society on shaping a legally-binding global treaty that aims to end plastic pollution by 2040.

Plastic pollution is one of the greatest global environmental challenges we currently face and it is predicted that unless action is taken there will be a threefold increase in the amount of plastic flowing into the ocean between 2016 and 2040.

In partnership with the Ocean Plastics Leadership Network – an organisation comprised of industry, scientists and activists – the UK Government is running a series of dialogue meetings, which will be key in strengthening the UK’s leading voice at the treaty negotiations.

At the first meeting, stakeholders including Tesco, Sainsburys, Coca Cola, Nestle, H&M and Greenpeace came together to provide their views on how UK businesses can contribute towards bringing an end to plastic pollution, and inform the UK’s negotiating position for a far-reaching treaty.

The international treaty will set obligations on countries to reduce pollution across the whole plastics lifecycle – from production and consumption to disposal and waste management. The first formal negotiations will take place on 28 November to 2 December 2022 in Uruguay and will be facilitated by the United Nations Environment Programme.

“Plastic pollution has a direct and deadly effect on our wildlife, polluting our ocean and damaging our planet.

“Our laws are already helping to cut waste domestically, and international action is needed to end plastic pollution by 2040.

“Today’s meeting was important in bringing together government, business and environmental organisations on this issue – it’s vital for us all to work together if we are to make progress in tackling plastic pollution globally.”

“We are honoured to collaborate with the UK Government on the UK Plastics Treaty Dialogues.

“Our objective with the series is to build knowledge and understanding of the UN Global Treaty process and various solutions, to help unite the myriad of stakeholders in working together in efforts to solve the plastics crisis.

“We aim to expand this effort to 20 countries worldwide.”

Current commitments around the world will only reduce the annual discharge of plastic into the ocean by 7% by 2040, according to the Breaking the Plastic Wave report published by the Pew Charitable Trusts. The only way to achieve a significant reduction in the flow of plastic into the environment is by taking action across the whole lifecycle of plastic, reducing our consumption of plastic, re-using plastic products and improving waste management systems.

The UK has been a leading voice in attempts to tackle marine plastic pollution, co-sponsoring the proposal to prepare a new treaty and being a founding member of the High Ambition Coalition to End Plastic Pollution, a group of more than 30 countries calling for a target under the treaty to stop plastic from flowing into our lands and ocean by 2040.

This builds on the UK’s world-leading efforts to tackle plastic pollution at home. We have so far introduced a plastic packaging tax on packaging that contains less than 30% recycled plastic, a ban on microbeads in rinse-off personal care products, and measures to restrict the supply of plastic straws, plastic drink stirrers and plastic-stemmed cotton buds.

Our carrier bag charge has reduced the use of single-use carrier bags in the main supermarkets by over 95%. We plan to go even further through our Environment Act, which enables us to change the way we manage our waste. Through the introduction of extended producer responsibility for packaging, we will ensure producers cover the costs of collecting and managing plastic waste.

How To Detect Government Greenwash

This press release is a poorly-written, rather clumsy example of government greenwash, but it contains most of the usual tricks of the trade. Here are our top 5, and our tips on how to spot them.

Conventionally, a press release announces something. An action. Something that makes today significantly different from yesterday.

This is why it’s handy to highlight the action bits – the clauses containing verbs related to the headline.

Another press release convention is putting the most important bit first, early in the first sentence. That’s as far as many people get.

So, in a press release that claims the UK is ‘leading the way’, the action they’re telling us about is…

Total carbon reduced as a result of this trumpeted action? Zero.

Here are the next few verbs we’ve highlighted:

etc. etc. You get the picture. Non-specific, consequence-free, future tense, plenty of promises, all adding up to nothing that has, or will measurably, lead to carbon reduction.

This one contains plenty of dates, some of them some some distance in the future.

Here’s a handy rule of thumb. The more multiples of electoral cycles that separate a incumbent minister making a promise from facing the results of that promise, the less meaningful it is.

The closest this press release gets to a solid number, at least one that could be audited to measure carbon reduction, is:

95% is an impressive-sounding number, but the claim is much diminished by the insertion of ‘main’, and ‘single-use’.

If this is the government’s most specific verifiable achievement, yet it appears right at the bottom of the press release, suggests even the creative drafters of this press release know it’s not much COP…

So, be sceptical of any government declaration about climate action that’s missing numbers, in particular numbers attached to hard, verifiable commitments to reduce greenhouse gas emissions in the near future.

This is a fun bullshit detector, applicable to all political rhetoric, but particularly effective with greenwash.

Whenever you hear or read an impressive-sounding assertion or claim, try inserting a negative and see if the opposite is something that their political opponents, or any sensible person, would wish for. The more ridiculous the negative version sounds, the more trivial their original assertion.

Take the quote from the Ocean Plastics Leadership Network:

“Our objective with the series is to build knowledge and understanding of the UN Global Treaty process and various solutions, to help unite the myriad of stakeholders in working together in efforts to solve the plastics crisis.”

“Our objective with the series is to demolish knowledge and understanding of the UN Global Treaty process and various solutions, to help divide the myriad of stakeholders in working together in efforts to solve the plastics crisis.”

If no one is actually proposing the opposite of what you say you’re doing, why make such a song and dance about what you’re doing?

Top Tip: Insert an opposite

How will we be able to tell if it’s worked? What’s the test, the proof of the pudding, by which we’ll be able to assess your actions?

Clever writing or rhetorical bluster make it easy to skate over this critical question. Any claim of a carbon-reducing action is dodgy if it doesn’t come with a carbon price tag.

is nice filler to end a list, but what different have these ‘measures’ made?

How much carbon was saved as a result of ‘restricting the supply’ of plastic drink stirrers? And how would that compare, in Gigatonnes, with alternative proposals that would be politically harder, i.e. those that threaten the interests of the Business and Media Heads?

Top Tip: How will we know?

Search Engine Optimisation have made headlines even more important, for the same reasons they’re always been.

Many people don’t read past them.

This is a great opportunity for greenwash in a press release. Simply assert something in the headline, in this case that Britain is leading the world in blah blah blah, and there are plenty of readers who’ll read no further, and simply take it at face value.

Some may even circulate it, or re-post it, without actually reading it.

In this case, what evidence does the press release’s text contain that even tenuously supports the headline’s claim? Britain is neither leading the world, nor will what’s described ‘end plastic pollution’.

What else is See Through News doing about greenwashing?

If you found this article useful, informative or interesting, See Through News has a range of projects that address various aspects of the Business and Media greenwashing. Some examples:

Having the tools to detect greenwash, and to separate inconvenient truth from wishful thinking, is critical to taking effective climate action.