The Strange Case of Rooftop Solar Panels Down Under 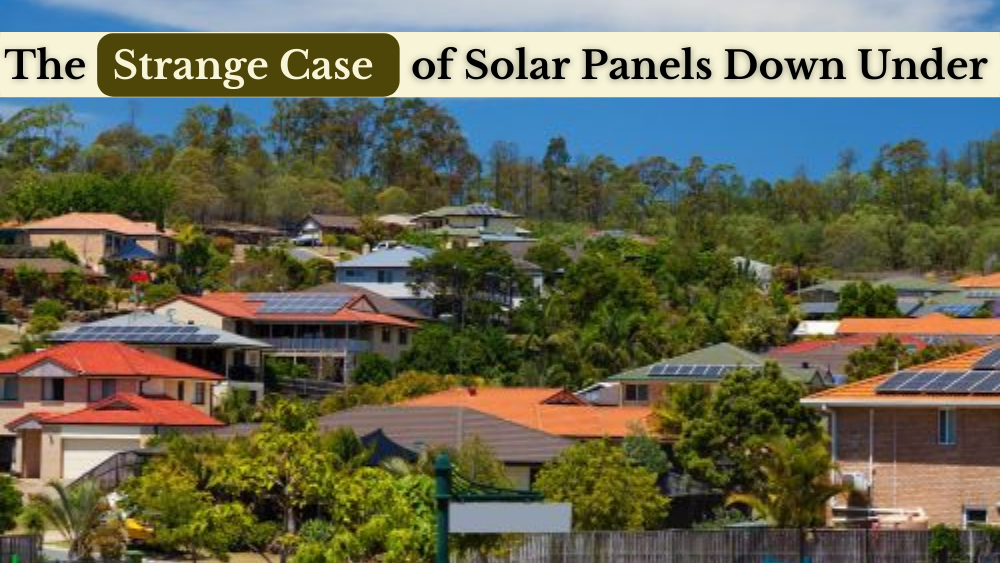 Solar Panels Down Under – the role of government regulation and what lessons they hold for the rest of us.

This MIT paper on the uptake of rooftop solar in Australia is a zinger.

Its analysis of the ‘keeping up with the Joneses’ dynamic in the global leader in installing domestic photovoltaics (30% of all Aussie houses now have solar panels) provides some counter-intuitive, and subtle insights into the complexities of our attitudes to reducing carbon. But what’s the true lesson the rest of us can draw?

I test whether economic incentives impact peer effects in public-good settings. I study how a visible and subsidized contribution to a public good (installing solar panels) affects peer contributions to the same good that are neither subsidized nor visible (electing green power). Exploiting spatial variation in the feasibility of installing solar panels, I find that on average panels increase voluntary purchases of green power by neighbors. However, when subsidies to solar are high, solar panels reduce peer contributions. The results support the hypothesis that signals drive peer responses to visible public-good contributions and that economic incentives alter those signals.

Here’s a less academic discussion of the results, by the same author.

Why did this article catch our eye?

The role of Government Regulation

Much See Through News energy goes into emphasising the relative importance of government regulation over individual behavioural change.

We’ve shoehorned it into speeches about language learning, made up paper-and-pencil party games, and our team of international volunteers is developing an online game based around this critically important notion.

As the world leader in getting solar panels onto domestic roofs, the role played by the Australian government merits our close attention.

After all, Australia’s stellar reputation when it comes to solar panels is an anomaly. In so many other fields, Australia is a laggard on carbon drawdown. It’s by far the world’s biggest coal exporter, accounting for 36% of the global total.

Websites that track and rank climate action reckon Australia has a dreadful carbon drawdown record. There are signs that the realities of climate change in the form of fires and floods are starting to change this, but Down Under is starting from a very low bar, and has a lot of inertia to overcome.

If Australia’s world-leading position when it comes to rooftop solar panels is an outlier, what can the rest of the world learn from studies like this?

This paper raises some fascinating and important nuances about using government regulation for effective climate action. We’ll explain them, as best we can, before explaining why we needn’t have bothered.

Keeping up with the Joneses rooftop solar panels

The findings of this Australian research are every bit as complex and obscure as this article’s abstract and headlines suggest.

Essentially, the energy choices made by a sample fo 300,000 residents of the state of Victoria over the decade from 2009-19 suggest a possible negative effect of ‘green’ energy subsidies if some neighbours think the financial benefit of such official incentive schemes is not big enough.

Or maybe if the perceived financial benefit is too small.

In any case, it’s all about peoples’ perception of the unblinking physics of carbon reduction when viewed through the filter of tribal affiliation, peer pressure and peer jealousy.

The ‘conclusions’ of this report are buried in a confusing thicket of caveats and double- negatives, and a long list other potentially more significant variables.

Nuanced, even interesting, but how relevant is this really to See Through News’s broader emphasis on government regulation, or lack of it?

So does this matter?

Or rather, the significance of this kind of research lies in how easily distracted we are by ineffective fiddling around the fringes of carbon drawdown, while ignoring its brutal, inconvenient, realities.

Agonising over the subtleties of peer-psychology in nudging tiny incremental behaviour change in installing solar panels is about as practical as debating the merit of giving the Titanic another lick of paint, as water gushes into the hold.

Let’s keep a sense of proportion. A few thousand more Australian households putting solar panels on their roofs is, of course, not a bad thing in itself. But how much carbon does that save relative to the huge impact of shipping out 36% of the world’s coal exports every year?

We’ve not done the sums, but would expect any serious study of Australia’s ‘green shoots’ to have done so. In terms of population, Australia’s 26M citizens ranks 56th out of 210. Aussies are outnumbered by Madagascans, Ivorians, Venezuelans, Yemenis and Nepalis.

Raising the proportion of homeowners from a world-leading 30% to a 31% is not a bad thing in itself, but there’s little point in agonising over Australia’s tiny marginal gains and nudges when a third of the world’s coal exports leave its docks.

What all this speculative behavioural psychology lacks is a carbon-audit.

What are the relative impacts of a few more rooftop panels to an economy that’s still addicted to fossil fuels, and a political system that remains captured by Big Coal?

It asked a selection of ordinary British people what they wanted to make their homes ‘greener’.

The study only involved 24 participants in a ‘citizens panel’, but provides many insights into the gap between perception and reality in Europe’s least carbon-efficient housing stock, and the possibility that the gap is closing, in understanding at least. We’d also argue that it’s more useful than the more academically impressive Australian study, for reasons we’ll explain.

First, here’s a summary of its ‘key messages for policy makers’:

Eyes on the carbon drawdown prize

These kind of public perceptions of the importance and influence of government regulation, incentives and other forms of intervention are, we reckon, an essential first step to putting them into effect.

The potential carbon reduction of the kinds of actions being discussed here look like they’re way higher than persuading a few more people to install rooftop PV.

We’d still like a full carbon audit to be sure, but that’s a criticism we’d apply to nearly all discussion of ‘green’ policy. It’s why we spend so much time and effort trying to direct public attention to initiatives like Project Drawdown, which, as precisely as is practicable, do put a specific and meticulously-calculated carbon price tag on everything.

Once you compare carbon price-tags, much of of the distracting fog clears. For those who’d like to preserve as much of human civilisation as possible, the paths to follow become much clearer.

Why not look at the biggest ticket items first?

Instead of worrying about the paintwork, should we not repair the gaping hole in the hull, pump out the water, and focus on avoiding icebergs?