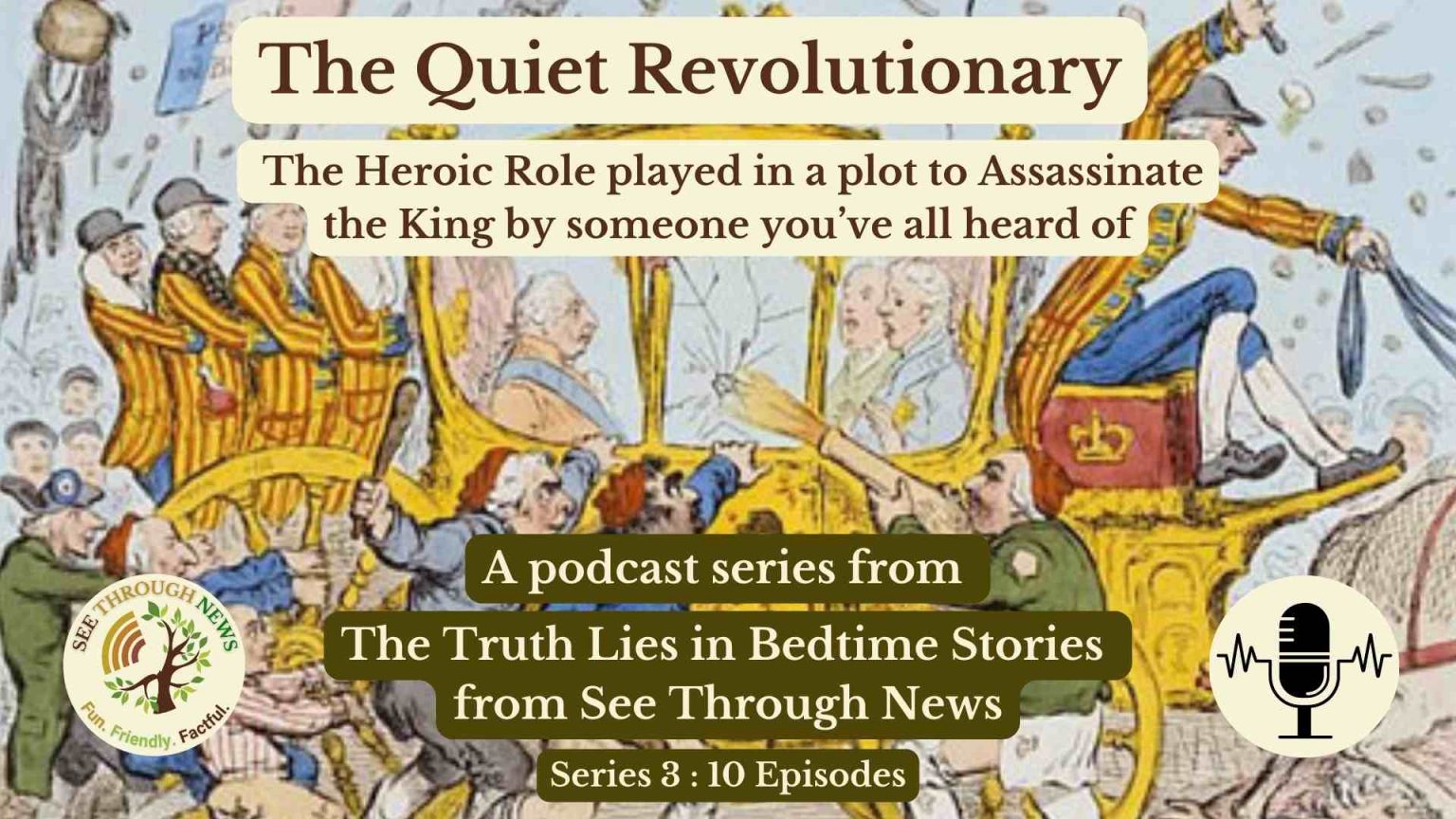 Episode 2 of The Quiet Revolutionary: the heroic role played in a Plot to Assassinate the King by someone you’ve all heard of, Series 4 of our ‘The Truth Lies in Bedtimes Stories from See Through News’ podcast

In Episode 2, Series 4 of our podcast The Truth Lies in Bedtime Stories, The Quiet Revolutionary – The Cauldron, we meet our hero in 1794 London.

Next: Episode 3, The Pint-pot Paperweights.

If you enjoyed this series, please share it with others, and try our other stories.

The Quiet Revolutionary is a podcast by The Truth Lies in Bedtime Stories, from See Through News.

See Through News is a non-profit social media network with the Goal of Speeding Up Carbon Drawdown by Helping the Inactive Become Active.

At the time of our story, James Parkinson is 39 years old.

James qualified as a Surgeon a few years back, and is now establishing himself as a Physician.

He’s taken over the family business from his apothecary-surgeon father John. James works, and lives with his young family, at No 1 Hoxton Square, London.

In 1794, Hoxton is one of London’s more fashionable addresses.

But London is changing, and changing fast. Britain’s Industrial Revolution, and Imperial Expansion, are in full swing, and its capital city is full to the brim of incomers seeking a living, a fortune – or asylum.

The surgery at No 1 Hoxton Square is busy. On its patient list, the well-to-do are being joined by the hand-to-mouth: poor weavers, carpenters, theatrical low-life.

The fine high-ceilinged rooms of Hoxton’s handsome townhouses are occupied by landowners, merchants and professionals, whose horizons are ever-expanding.

In the gaps and spaces around them, Hoxton’s attics, basements, courtyards and alleys are filling up with those whose vision extends no further than their next meal.

Let’s pause, at No.1 Hoxton Square, skip up the stairs, slip through the front door, and peek into the Physician’s waiting room.

There, in the upholstered armchairs, are the fine ladies and gentlemen of Hoxton. They hold perfumed silk kerchiefs to their noses. On the wooden benches at the other end of the room, are labourers and skivvies, pungent with labour.

The surgery door opens! We catch a glimpse of our hero…

(Historians, I discovered from Dad’s trove, have only turned up one physical description of James Parkinson. All we have to imagine Jame’s appearance is this, written by a geologist colleague of his, 26 years after James died.

‘Mr Parkinson’, it reads, ‘was rather below middle stature, with an energetic intellect and pleasing expression of countenance, and of mild and courteous manners, readily imparting information, either on his favourite science, or on professional subjects”.

So, it seems that in later life James was, to his geologist chums at least, modest and mild-mannered.

But our fossil-hunting biographer didn’t know James Parkinson at the time of this story.

Aged 39, James is passionate about Politics. In 1794, five years after the French Revolution, he’s hardly alone in this, but James’s interest is more than passive.

Devoted though he is to his patients, James also devotes his all spare time to writing pamphlets, which urge Reform in order to avoid Revolution.

James’s pamphlets are shared with like-minded professionals, as they correspond up and down Britain.

One of Jame’s close friends is John Smith, Book-seller, of Lincoln’s Inn Fields.

In 1794, bookselling is booming, and John Smith is thriving.

Every day, there’s more to satisfy their hunger.  One by one, Old Truths are being exposed as Ignorance, Fakes, and Lies. They’re calling this the Age of Reason, for a reason.

But in 1794, bookselling is also a sensitive business.

Whether they contain Truth or Lies, books hold Knowledge. And Knowledge is Power.

The Power-ful want to be the ones who determine which News is True, and which is Fake. The Power-ful don’t trust the Swinish Multitude to decide for themselves. Only when their Fear exceeds their Greed, do the Power-ful relinquish any Power.

In 1794, bookselling is a dangerous business.

Every few days, John Smith tells his friend James about another printer and publisher who’s been arrested for Sedition, or Treason. They all protest that they’re  only advocating Reform in order to avoid bloodshed. But they all end up in the courts, in prison, or more often of late, even swinging from the gibbet.

James, John, and their circle of reformer friends wonder how long it will be before it will be John Smith’s turn to be arrested, and to have to plead his innocence.

Many of England’s emerging middle class, in possession of an education but no land, worry about losing their livelihoods. Bookseller John has good reason to fear losing his life.

Times are so strange, John Smith’s head is as much at risk from own Government as from any Revolutionary.

For John Smith, as for his newly-literate customers, books are opening eyes, just as the Government is shutting mouths, permanently.

James and Johns’ fellow-Reformer, and good friend George Higgins, who works at a chemist shop, likes to say that books are both tonic and toxin.

A couple of years ago before our story, bookseller John Smith and chemist shop-man George Higgins and a couple of other Reformer friends took a risk..

They concocted a cure for the affliction, a tincture of words and thoughts they hoped might relieve Britain’s malady.

They founded The London Corresponding Society.

The London Corresponding Society has rapidly become a major node in a nationwide social network of like-minded concerned professionals.

These Reformers, anxious Britain may be about to follow France into Revolution, meet to discuss their dilemma.

They usually meet in secret, in taverns and coffee shops throughout the land – you might call them Chat Rooms.

These Corresponding Societies communicate, share and spread their ideas via the Postal Service. This new content delivery network is growing at phenomenal pace, boosted by brand-new communications technology.

In 1794, Robert Stephenson was three decades from demonstrating his Rocket locomotive, but the tracks, figuratively at least, were being laid. Canals, roads and stage-coaches were spreading across Britain, like cracks across thin ice.

Conveying letters has become too complex and important a job to be left to street urchins and servants. There are now specialist Post Men. The Royal Mail, founded by Henry the Eighth, is now getting seriously professional.

The year before the events of our story, their rising status and critical role in the Age of Reason has been marked by the provision of uniforms. For the first time, you can spot a Post-Man.

Round the kingdom they speed, spreading data in packets, from Inn to Inn, from Tavern to Tavern, House to House. This Union-Wide-Web is astonishingly rapid and efficient.

Its sheer scale makes it impossible for the Government to monitor. It also makes it easier for ordinary people to conceal their intentions – and their identities. Unlike the uniformed Post-Men, correspondents can conceal themselves in a cloak of anonymity…

James was among the first to join the London Corresponding Society, and it’s core is now formed by these three friends – James the Physician, John the Bookseller, and George the Chemist’s Shop-Man.

If you’re wondering what a Chemist’s Shop-Man is, that’s how the court records Dad dug up record his occupation.

Nope, I’m not entirely sure what a Chemist’s Shop-Man does either, but George Higgins is a minor character in our story, so let’s crack on. London in 1794 is no place to loiter or lollygag.

In 1794, the stench of Revolution is gusting across the Channel.

The Capital’s coffee shops and taverns – like the Shoreditch tavern in which we find James, John and George, now they’ve left their places of business – teem with the newly-enfranchised middle class.

They pore over pamphlets, news-sheets and news-papers, these Correspondents, trying to sift hard fact from the gush of rumour, speculation – and Fake News…

They talk and talk, but they talk in low voices.

Among them are spies, in the pay of the Prime Minister’s increasingly paranoid Attorney-General, John Scott.

John Scott has instructed them to keep an ear out for Britain’s would-be Dantons, Marats, and Robespierres. The Attorney-General’s snitches get bonuses for successful arrests and convictions.

These whispered conversations and private letters sometimes end up in print. Anyone who can hold a quill seems to be writing a pamphlet on the political situation.

Some wave the flag, and say the Attorney-General’s iron fist is insufficiently ferrous. They tend to publish under their own names.

Most, however, urge Reform. Many of them, fearing reprisal from the unbending Attorney-General, protect themselves with pseudonyms.

You can feel England bracing itself…but for what? Revolution? Repression? Reform?

No one knows – but everyone wants to know.

Nine years before the events of our story, a London insurance agent, was bankrupted by a Jamaican hurricane.   He decided it was time to look for a steadier line of business.

He started a news-paper, giving it the modest title of The Daily Universal Register.

The quality of its Continental coverage, particularly the astonishing events in Paris, soon gained The Daily Universal Register a reputation as one of the more reliable of the mushrooming array of news-sheets.

Six years before our story, The Universal Register rebranded itself as ‘The Times’ – simpler, more eloquent – much more gravitas.

But in this crowded Shoreditch tavern, the three wigged heads we now see huddled together are not concerned about The Times’s masthead.

Amid the tavern’s hubbub and bustle, they’re poring over the tight dense columns below it, and the news these columns contain from across the Channel.

Let’s imagine ourselves to be one of those serving wenches, or pint-pot boys.

Are we in the pay of the Attorney-General, or are we just curious about what these three men are murmuring?

I’ll leave that up to you, but either way, we have to get close – it’s hard to hear what Physician James, Bookseller John, and Chemist’s Shop-Man George are saying.

In Episode 3, The Pint-Pot Paperweights, we see how much of their conversation we can pick up.