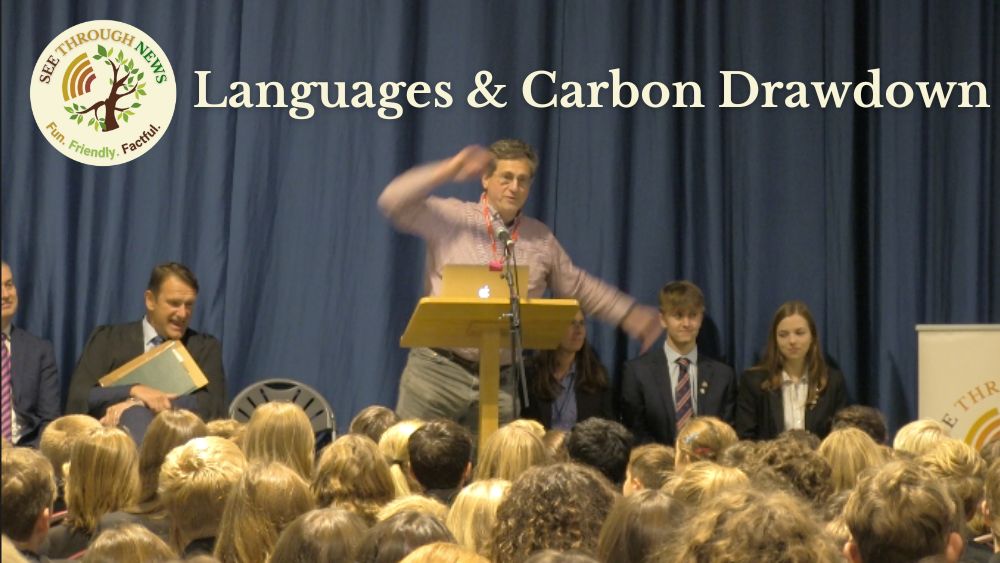 The answer’s reducing carbon – what was the question again?

Given that we’re carbon-based life-forms, the fact that all roads lead to carbon shouldn’t come as a great surprise.

Still, it’s a fun challenge to our storytelling methodology to see how short and straight a road we can take from any starting point before winding up at our constant destination – effective climate action.

Unusually for a British person, See Through News Founder and Gift Horse Distributor Robert Stern happens to be a polyglot.

Being quite passionate on the subject of the pleasure and importance of language learning, and the efficacy of the British educational system in sucking the last drop of fun from what should be a naturally enjoyable process, he was asked to deliver a morning assembly at a British private school, to mark European Languages Day.

Robert was happy to agree, on three conditions:

As a zero-budget, not-for-profit, run entirely by volunteers on donations, See Through News can only thrive if it can engineer win-win situations.

This Languages Day talk would appear to be a good example of mutual benefit.

The school was delighted with a fun, engaging, memorable ‘inspiring’ Languages Day assembly. The Head of Languages verdict:

You were a hit! So many students and staff commented on how positive, frank, real you were, and you have enthused a lot of people! So a heartfelt merci.

At the same time, See Through News gained a lot from the morning.

The Virtues of Live

Social media, and our content delivery network utilising the ‘free’ infrastructure provided by our Silicon Valley Overlords, is the basis of the See Through News strategy. Despite all the noise, distractionand competition, there’s nothing like the virtual world for rapid, scalable influence.

Still, live audiences, especially ‘tough crowds’ like 1,000 teenagers first thing in the morning, provide the kind of visceral, immediate, real-world feedback that no granularity of online stats can match.

By the same token, live events affect people more profoundly than virtual experiences, so whatever climate activism impact this engagement may have had, was multiplied by the fact that people were in the same physical space.

The Power of Storytelling

Old school storytelling tricks, like the Rule of Three, use of humour, misdirection, callbacks, rhythm and repetition, are as old as human communication.

They still work fine online, on the screen or on the page, but there’s nothing like a living, breathing audience to road-test a good shaggy dog story, gag or mic-drop line.

The Adaptability of Transparent Trojan Horses

If this kind of shoehorning of See Through News’s Goal works on a school languages day, it suggests it might work just as well in many other contexts.

The See Through News storytelling methodology can at first sight appear convoluted, irrelevant or tortuous, but if it succeeds in attracting Attention, then Interest, Desire and Action can follow.

This process, known to advertisers as AIDA, has worked for thousands of years for heroes, demagogues, cult leaders, politicians, snake oil sellers, and priests. Seems to work just fine for carbon drawdown too…