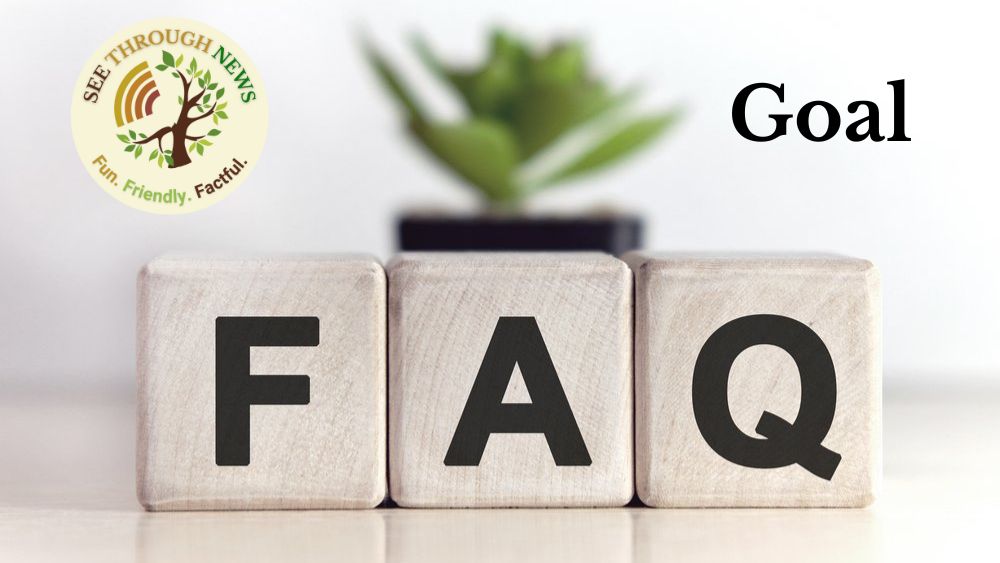 What people ask us about the See Through News Goal of ‘Speeding Up Carbon Drawdown by Helping the Inactive Become Active’.

What is ‘See Through News’ anyway?

You own the @seethroughnews handle on all social media platforms?

You mention ‘Effective Climate Action’ , so what’s with you wordy Goal?

Only 10 words: ‘Speeding Up Carbon Drawdown by Helping the Inactive Become Active’.

I feel I should know what ‘carbon drawdown’ is, but can’t quite put my finger on it…

a) stopping putting more greenhouse gases into the atmosphere

b) removing what’s already up there.

Imagine the Earth in a bathtub. For hundreds of millions of years, the water level has been at the equator. Since the Industrial Revolution, it’s been creeping up. ‘Carbon drawdown’ is turning off the tap and pulling out the plug, until we’re back where we were.

OK. ‘Carbon Drawdown’ sounds like a good idea. Nice explanation, by the way.

Thanks. It’s what we do. And you’re welcome.

How about ‘Helping the Inactive Become Active’? Sounds a bit woolly.

We agree, and our aim is to make it less woolly. See Through News is pragmatic and non-ideological about how we draw down carbon, and scientifically identifies, then promotes, the most effective forms of climate activism.

OK, you’re trying to save the planet…

Nope. The planet’s fine. It’s 99.8% rock and has been around 4.5Bn years. See Through News is about identifying, evaluating and spreading the most effective ways to mitigate the worst effects of human-induced climate change on humans and the rest of the biosphere.

OK, but Greta and all famous environmentalists say ‘Save The Planet’. It’s an easier sell.

Why so pedantic then?

What needs ‘saving’ is not the planet, but human civilisation. Plus it’s not even a binary question of survival v. annihilation.

The difference between maxing out at +1.8 degrees instead of +2.1 degrees could be existential for billions of people.

Fair point. I see what you mean by ‘pragmatic’.

Our focus on the shortest, quickest route to carbon drawdown is laser-like.

So if the ‘shortest, quickest route to carbon drawdown turns out to be fascism, you’d support it?

The shortest route usually involves equity, human rights and democracy, but to be consistent, yes.

They’re important, but less important than carbon drawdown. We can prioritise such second-order issues once we’ve stabilised atmospheric carbon. Without the norms of human civilisation, they’re moot. Classic ‘whataboutery’, by the way.

Hang on, I’m not the bad guy here.

When it comes to climate activism there are very few ‘bad guys’. The problem is those few bad guys are very powerful, rich and influential. Our goal is to combat their messaging.

The ‘bad guys’ are principally: 1) Big Oil & related vested Business interests who benefit from a fossil fuel status quo, exerting undue influence on 2) Governments who are supposed to act in our best interest, and 3) the billionaire-owned Media that amplifies bad guy messaging.

For snappiness, try ‘The Three-Headed Beasts’ of Government, Business and Media, connected below the neck by Power, and below the waist by Money.

Much better. But what messaging?

The ‘Deny’ ship has largely sailed, but ‘Distract’ is still working fine.

Focusing on individual, rather than corporate, responsibility gets Three-Headed Beasts off the hook. Blame yourself for smoking, not us for selling cancer sticks. Divide and rule.

Exactly. While we fritter away our limited ‘Activism’ energy on plastic straws and litter-picking, the Beasts get on with making money by putting more carbon into the atmosphere.

That’s when you realise ‘doing my bit’ is futile, and give up. Climate Inactivism is the perfect outcome for Big Oil. That’s why they’ve spent decades and billions of dollars promoting it.

But isn’t it important for us all to do our bit to save the planet?

Sorry – isn’t it important to identify, evaluate and spread the most effective ways to mitigate the worst effects of human-induced climate change on humans and the rest of the biosphere?

We concur with your shrewd characterisation of the issue.

I see what you did there…If not individual actions, what is the shortest route?

What, you mean communism?  We tried that and…

…who mentioned communism? See Through News is pragmatic, not ideological, remember. Well-regulated capitalism could work OK.

But don’t we need to do both – individual action and government regulation?

…You’re just pulling those numbers out of your…

…fundamentally, See Through News deals in facts and objective truth. 10/90 is an approximation, but based on peer-reviewed science.

What facts? What science? What peers?

Of the top 20 most effective ways of speeding up carbon drawdown, we as individuals can only implement 2. The other 18 all require government regulation. Hence 10/90.

Whoah – there’s a list that ranks the Top Twenty most effective ways of speeding up carbon drawdown?

Have you not heard of Project Drawdown?

Oh I see, some bunch of do-gooder tree-huggers has dreamed up some list of grievances that blames The Man for everything?

Not exactly. Hundreds of the world’s top scientists covering a broad range of expertise spent years painstakingly compiling a constantly-updated database of practical solutions, all based on current proven technology, which they don’t want you to look at until you fully understand their rigorous methodology. And even then, they’d rather you read the footnotes first.

Blimey. What a palaver.

Quite. That’s why they need some help with their PR.

So what does this list all mean?  Why have I never heard of ‘Refrigerant Management’, which is at #4?

You’re now looking at what every school child should be able to recite by heart, and every government official should consult first thing in the morning, last thing at night, and before making any policy about anything. Starting 50 years ago.

But why have I not heard about ‘Project Drawdown?

Ah. Is it the Three-Headed Beast…?

Now you’re getting the point of See Through News. In many ways we’re just trying to do Project Drawdown’s advertising for them. They’re brilliant scientists, but hopeless communicators.

But people invest a lot of passion, time and energy into ‘doing our bit’. I myself am thinking about buying an electric car, I always recycle my plastic, and I’ve even started litter-picking once a month. I don’t want you to come along and tell me it’s all pretty much pointless.  I may as well just…

Ah.  I now see what you mean about the ‘Despair’ thing.

Right. See Through News is designed to help people get past Denial, ignore Distraction, and focus on the shortest possible route to carbon drawdown, avoiding Despair.

You mean ‘Speeding Up Carbon Drawdown by Helping the Inactive Become Active ’.