What IS ‘Carbon Drawdown’? 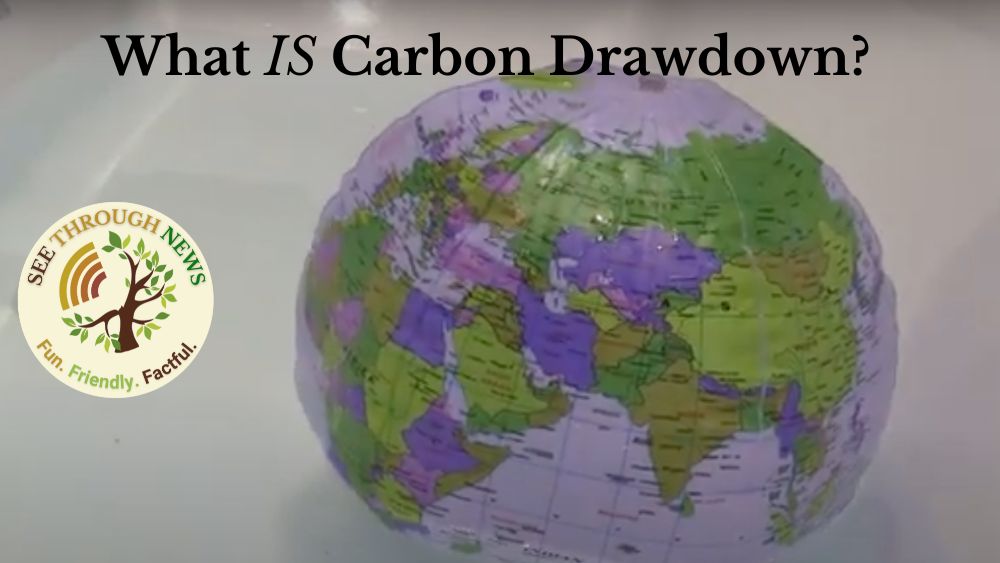 Why this unfamiliar phrase constitutes 1/5th of our Goal

Most people don’t know what ‘Carbon Drawdown’ is, but we think it’s a key to stimulating ordinary people into effective climate action.

This unfamiliar phrase make up 20% of our 10-world Goal of Speeding Up Carbon Drawdown by Helping the Inactive Become Active, because it’s familiar enough for most people to think they should know what it means, but unfamiliar enough to induce them to ask for clarification.

Thus, it also exemplifies and models See Through News storytelling methodology, of eliciting the question rather than proffering the answer. Rather than tell people stuff we think they should know, we spin a yarn that induces them to beg us to tell them the exact thing we intended to tell them all along…

We want people to ask us ‘What IS carbon drawdown?’.

The question often comes wrapped up in a ‘just asking for a friend’ wrapper, but usually works. Being asked is so much more engaging – and hence effective – than telling.

There are many impediments to making carbon drawdown a household term. The forces that benefit from the status quo – principally the Government/Media/Business nexus of interlocking power and influence, profit from inaction.

The Three-Headed Beasts Standing Between Us and Carbon Drawdown

We explain this paradigm in our Three-Headed Beasts allegory.

This short poem, and accompanying video illustrates the See Through News methodology as the same time as implementing it.

Billed as ‘The Human Condition in 300 Odd Words’, The Three-Headed Beasts is set to music, and animated (currently crudely, so more proficient animators are more than welcome to volunteer their skills).

It uses words a 10-year-old could understand. This is less ambitious than another of our Projects, the bleeding-edge AI project The Magic See-Through Mirror. The series of 8 short videos is designed to be enjoyed by a 6-year-old. We also have a full-fat Geek Version for AI experts, a 6-minute video explaining taxonomic tagging via tennis balls and velcro, and a real-world example.

So what’s the answer – what IS Carbon Drawdown?

We’ve developed a simple explanation, which we now present here in video format.

This is a rough-cut work-in-progress.

We publish it here to seek your feedback on the concept, to see whether it’s useful, how the music works, if the images do the job, the pacing of the delivery, the script – and a better submersible globe model.

Imagine a globe bobbing in a bath.

For hundreds of millions of years, the water level has been at the equator.

A couple of hundred years ago, we turned the tap on, and the water level has been creeping up ever since, wreaking havoc..

The sooner we return to the previous level, the sooner the havoc will be diminished.

The fastest way is to do two things at the same time.

When the water level returns to where we’re used to, we can put the plug back in.

But right now, the tap is gushing faster than ever, and the plug’s still in.

Economists familiar with the origin of the ‘drawdown’ concept will correctly cavil that technically, drawdown only refers to the removal of carbon from the air, rather than preventing new carbon from entering the atmosphere.

While true, let’s just say the concept has been expanded in its environmental context. The truth is we’re stuck with it because that was the phrase chosen by Project Drawdown when they embarked on their critically important work, which forms the keystone of everything we’re trying to do at See Through News.

We’re doing what we can to remedy this…