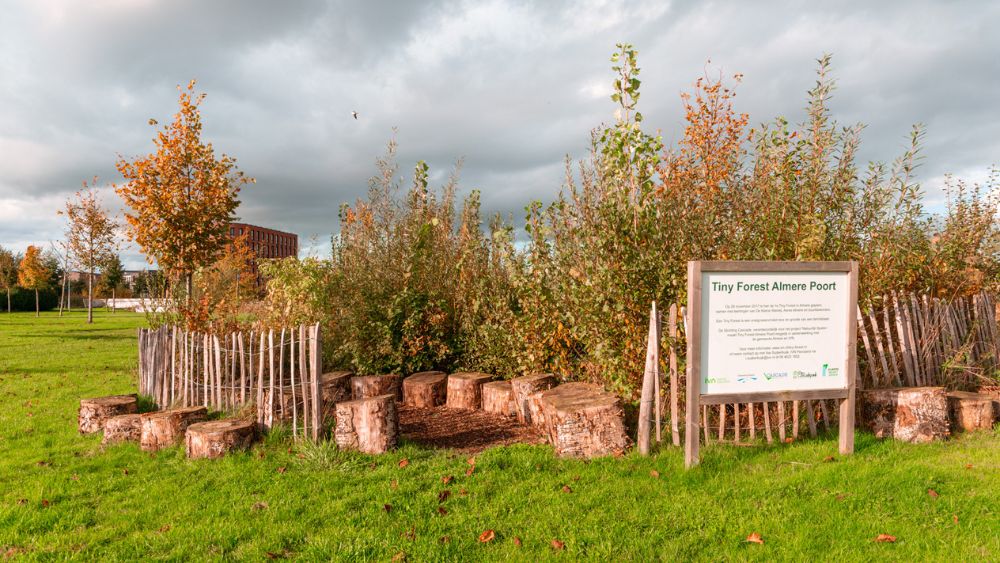 It’s a good phrase, ‘tiny forest’. Almost an oxymoron, it sounds like an almost joke, like the world’s tallest dwarf, or shortest giant.

It also makes you think what, actually, is the difference between a wood and a forest?

The Chinese clearly gave this some thought thousands of years ago, when creating their pictographic writing system.

The Chinese character with the root meaning of ‘tree’ or ‘timber’ is a stylised pictogram of a tree.

Here’s the character for ‘lin’, meaning a wood.

And here’s the character for ‘sen’, meaning a forest.

You can follow the Chinese logic – more trees=more wood. And common sense would dictate, more trees=better.

But as with most things connected to the complex intersection and delicate balance of things that make up ‘the environment’, it’s not quite that simple.

Take biodiversity. A huge forest of one type of tree can be a biological desert. Anyone who’s hiked through commercial plantations of sitka spruce in Scotland,cedar in Japan, or eucalyptus in Spain, knows you hardly see or hear a single living thing. Man-made forests, however vast (and carbon-guzzling) just don’t create the variety of habitats and nutrients required by sustain complex ecosystems.

By contrast, a really small clump of diverse trees, even bang in the middle of a city, can support way more biodiversity. Welcome to the Tiny Forest.

Their variety provides habitats for a wide range of birds, insects, animals, fungi, bacteria, all of whom can support each other, whether via the transactional process of pollination, or the more brutal one of eating each other.

Dot a series of such ‘tiny forests’ across a city, and you create a hopscotch corridor of interconnecting habitats. Even quite densely-populated cities can sustain a remarkable range of wildlife. Then there are all the other benefits of introducing green spaces to cities, from mental health to pollution reduction and carbon reduction.

This has been understood for some time. Tiny Forests are just one element of a Green Points scoring system developed by the Swedish city of Malmo during the 90s, which has since become the gold standard for planning, and measuring, green spaces in urban environments.

As local See Through News groups like this one in North London are reporting, these initiatives are slowly being taken up, but the process has been as painfully slow as, well, growing trees.

This report, from the old days when Britain collaborated with Europe, details pilot studies in 8 EU countries, including several in the UK. All are based on the Malmo model.

It looks inspiring, until you realise it’s more than a decade old.

First, we’re seeding the idea of them – pun intended – throughout our growing network of social media sites and groups.

For more details on this zero-budget exploitation of the creations of our Silicon Valley Overlords, and how we’re ju-jitsuing their ‘free’ infrastructure to further our Goal of Speeding Up Carbon Drawdown by Helping the Inactive Become Active, see our Content Delivery Architecture.

Second, we’re using other See Through News projects, such as our community filmmaking project 1 Sunday Morning, 4 Films: doing good in…., as vehicles to promote projects like Tiny Forests as opportunities for local volunteering.

This provides another reason for people to get involved, creating new pathways to effective climate action.

While few people actively want to increase atmospheric carbon, or reduce biodiversity, many Unwilling Inactivists are put off by projects that honk ‘green’ klaxons too loudly.

If the become active however, the result from a carbon drawdown perspective is the same. This is the basis of our storytelling methodology.

Just as carbon molecules are indifferent to who releases them into the atmosphere, the same is true about who doesn’t, or who returns it to the ground.