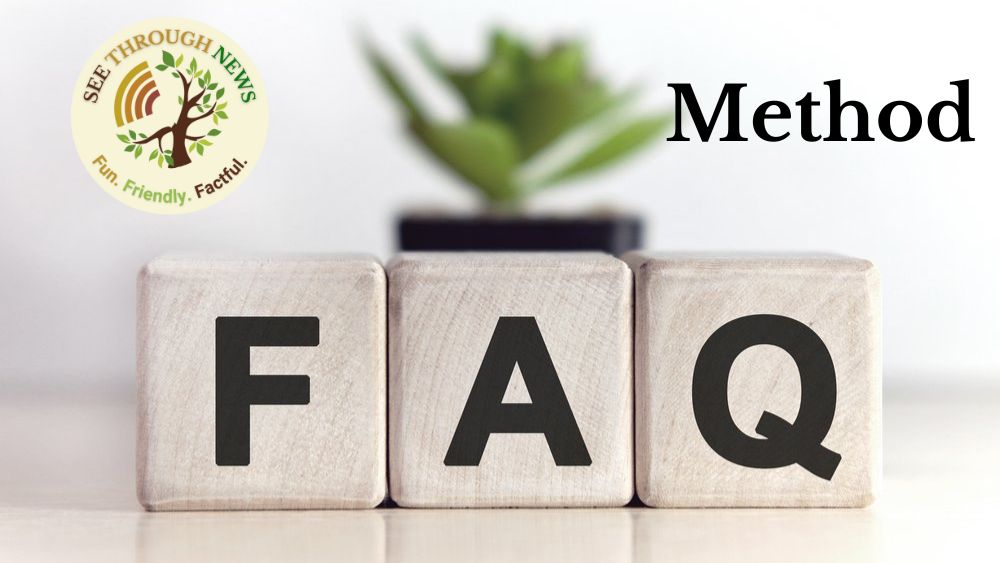 I just read your Goal FAQs. They were unusual, and more entertaining than most FAQs.

Thank you. Do you realise you’ve just answered your own FAQ on our method?

What Jedi mind-trick voodoo is this? I’m meant to be asking the questions, not you!

To get your audience to ask you exactly what you intended to tell them all along.

But isn’t that highly manipulative?

Don’t you fee bad about that?

This FAQ is not going to plan. Answer this – what’s so different about See Through News from any of the other zillions of green/eco/sustainability groups?

That’s quite a claim. Surely someone else must be doing it.

That’s what we thought, until we couldn’t find any.

How do you mean?

We spent two weeks at COP26 in November 2021, demonstrating our methods to the world’s most active climate activists, who all gave us green lights for originality and feasibility. And had fun.

So what’s this original, cutting-edge methodology that no one else has tried?

What’s that supposed to mean?

Extinction Rebellion and Greenpeace start at the end of the story. Their messaging presumes a lot of knowledge and pre-existing engagement. It’s like starting Little Red Riding Hood with the woodsman standing over the slain wolf.

Whereas See Through News…?

…starts with Red Riding Hood trotting through the wood and the wolf’s eyes peering through bushes. Literally, the first page of the storybooks.

Doesn’t that mean you need to tell very long stories?

It can do. But the design means you can join in wherever you like, depending on how much of the story you already know.

Yes and no. The art of getting people to want to know What Happens Next is as old as humanity. We just add social media, video, modern psychology and AI.

But who’s your target audience?

Back up – what do you mean ‘Unwilling Inactivists?

That’s what we call people who accept the science, cause and reality of human-induced global heating, but feel powerless to do anything about it.

But that’s most people in the world!

Hmm. You don’t lack ambition then. But what do you mean by ‘Ineffective Activists?

We explain in more detail elsewhere, but they tend to be ‘the converted’, who are engaged in ‘doing their bit’, but doing things that, whatever other benefits they may have, do not measurably reduce carbon.

Those kinds of things, but also pretty much anything that exclusively focuses on individual behaviour change as an end in itself.

That doesn’t sound very respectful towards people who are trying to do good.

It’s really hard to convince someone who considers they’re ‘doing their bit to save the planet’ that what they’re doing is ineffective.

So that’s why you focus on the Unwilling Inactivists…

You’ve got it. Have you noticed how you’ve started telling me exactly what I intended to tell you?

That’s very annoying, now you point it out. But I do see your point.

Well, that’s our methodology in a nutshell. Induce people to work it out for themselves through intrinsically entertaining, interesting, engaging fun projects.

But without honking a green klaxon.

Not until people ask us to honk, or start honking themselves.

But if the Unwilling Inactivists feel powerless, how can you change that?

It’s not easy. Those who benefit from the status quo encourage both Denial and Despair. Both are different forms of Inactivity.

And inactivity means business as usual.

Well put. You should try this yourself.

So your target audience are the people who’ve gone directly from Denial to Despair?

You’ve got it. We offer them an alternative – Effective Action.

Now you put it that way…

This is the storyteller’s trick, to reframe familiar narratives in a different way, directed towards a surprising, satisfying outcome.

We refer you to our previous answer. Another way of looking at it is we simply offer different points of engagement, and facilitate progress.

All our stories end up at the same place, Speeding Up Carbon Drawdown…

...By Helping the Inactive Become Active.