Flood control revolution in The Netherlands – Room for the Rivers 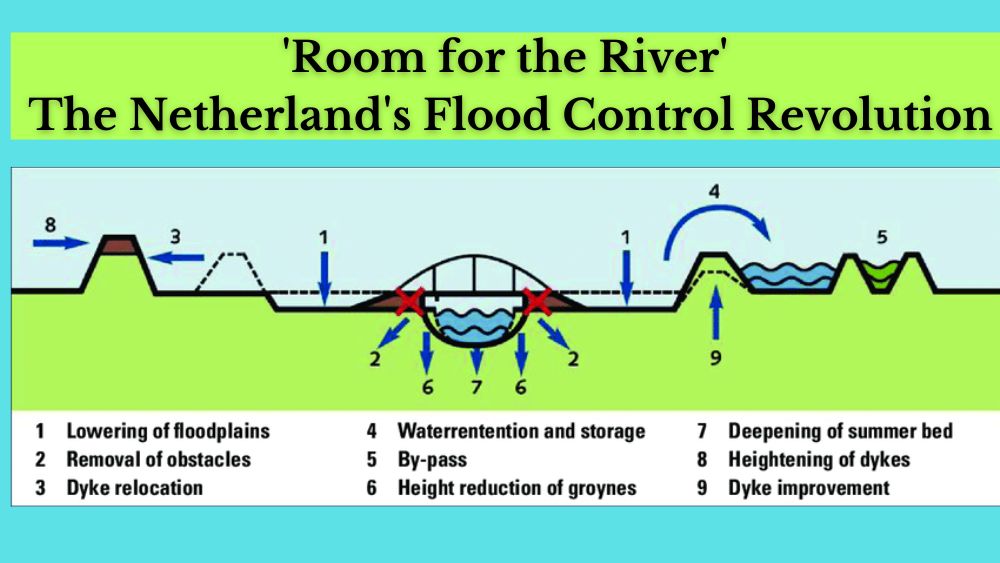 Dealing with floods by going Dutch

In 2004, See Through News founder Robert Stern made a documentary for Japanese public broadcaster NHK.

You can still find this short clip of ‘Room for the Rivers’ on YouTube. If you don’t speak Japanese or Dutch, the detail will be lost, but the graphic at 2’00” is self-explanatory.

It shows six different flood alleviation techniques – the graphic above features 8. They include methods that will be familiar to anyone who’s ever mucked about digging into the sand on the beach as the tide comes in, common-sense things like:

What none of them shows is what Dutch hydro-engineers have been doing for most of the past few centuries, i.e. building bigger and stronger dikes.

When Litmus Films made this documentary in 2004, this was its topical element. After centuries of trying to control nature, the world’s greatest experts in flood control were admitting defeat. The Dutch were waving the white flag, and retreating.

Their Room for The River (Ruimte voor de Rivieren) programme returned space to the rivers to flood, rather than attempting to contain the flood water.

For a country that is one-third below sea level, and among the most densely populated in the word, the threat of river flooding is of more than passing interest – it’s an existential threat.

For hundreds of years Dutch engineers came up with ever more ingenious and ambitious solutions to fight floods, principally bigger and better dikes.

But, as the Litmus Films documentary noted, by the turn of the millennium The Netherlands had decided to sound the alarm, raise the white flag, and retreat.

‘Room for the River’ was the government’s response to the alarming climate change data scientists were solemnly placing on their desks.

Faced with one-in-ten-thousand year floods becoming once-a-decade events, they recognised there was nowhere left to go. Engineering had reached its physical limits. Budgets had hit their political limits. The government could no longer acceptably mitigate the risks of catastrophe.

So, they started dismantling dikes, and moving them a hundred metres further from the river banks. Compensating a few farmers was well worth avoiding a catastrophe in the longer term.

It’s hard to put a number or value on the lives and money The Netherlands has saved over the years since implementing this programme, though they have the world’s best actuarial statisticians who try to do so.

It hasn’t stopped all floods, but they’re much less dangerous and damaging than they would have been without the project.

There have even been beneficial side-effects.  Ecologists worldwide have been astonished at the rapidity of the rewilding of one such reclaimed ‘polder’ (designated flood water reservoir). The Oosvaardersplassen Nature reserve is astonishingly beautiful, and biodiverse  now – take a look at this short film – but it was only created in 2018, as a result of this programme.

See Through News is flagging Room for the Rivers for a different, much more significant reason.

A Stitch in Time Saves Nine.

Don’t Spoil The Ship For A Ha’penny’ Worth of Tar.

Our ancestors understood what climate scientists now call ‘The Precautionary Principle’. If there’s even a small chance it could avert a huge future catastrophe, it makes sense to do a little preventative maintenance here and now.

So why are we still removing fossil fuels from the ground, and transferring all that long-interred carbon into the atmosphere?

The Dutch, raised on fables of a young boy’s digital solution to flood control, are acutely aware of the threat posed by rising sea levels. Indeed, it’s one of the  main things the rest of the world knows about the Dutch. The Boy Who Put His Finger In The Dike is proverbial worldwide, even though we wouldn’t recommend Googling it…

The Netherlands is blessed with many advantages. It has huge technical and financial resources to address the creeping waters, but in the end it’s subject to the same laws of physics as The Seychelles, Pacific Islands, and Bangladesh.  And the rest of the world.

For the Dutch, the consequences of Inaction on flood control are all too real, close in both time and space. It’s not hard for politicians to ‘sell’ solutions to concerned citizens, even if it costs a lot.

Atmospheric physics, as we’ve found out, is a harder, more abstract cognitive and marketing challenge.

The consequences of The Greenhouse Effect are just as predictable as flooding downstream when heavy rain falls upstream. As ineluctable as the point at which the Titanic could no longer steer away from the iceberg. But they’re too distant in time, and remote in space, to shock enough of us into action.

‘Room for the Rivers‘ has expanded rapidly since this film was made in 2004, but still not fast enough to save The Netherlands from loss of life and property damage when the rainfall goes into the Red Zone, as it is more and more frequently.

As predicted. By the experts. By science.

So how about paying a bit more attention to the scientific experts?

A stitch in time, and all that…