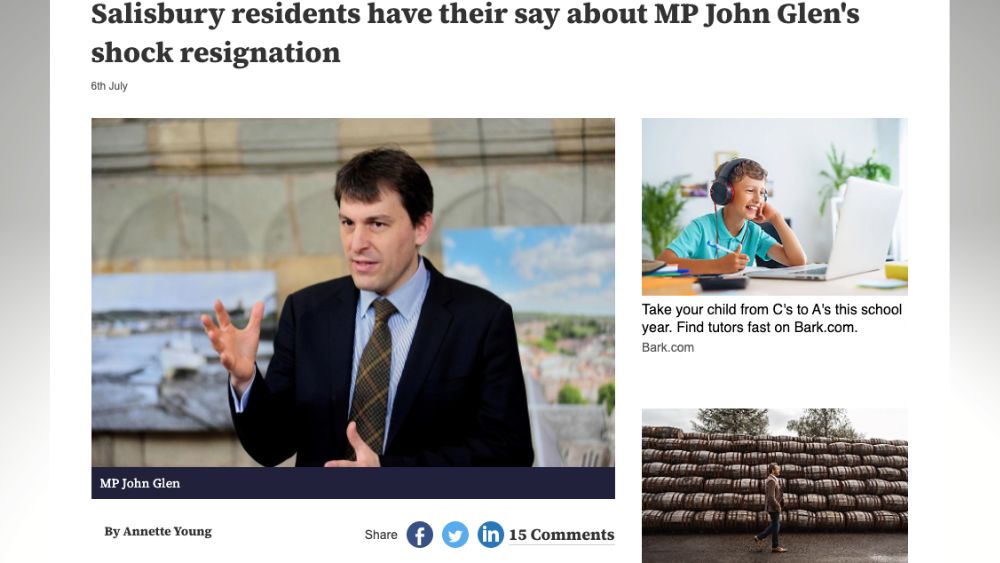 A: Articles that may as well have been written by robots…

An example of the local news problem

This Salisbury Journal article exemplifies a major problem with what local journalism has become.

The byline provides a red flag before we’ve even read the first word.  The article is credited to a ‘community news reporter’.

What other kind of reporters should a local newspaper have?

The answer to that once-rhetorical question is the subject of another article on SEO Journalism, but here we focus on why See Through News considers the kind of ‘journalism’ this article typifies so insidious.

To give it some credit, this is not an article about a cat that’s been rescued from a tree, or new cake shop, though both would have their place in a well-balanced independent news source.

This article is a about local response to a major decision taken by its local Member of Parliament. It is, unquestionably, local news.

The decision in question was about as big as it gets, so merits some context.

Who Is This Local MP?

Salisbury MP John Glen may not be a household name, but he’s not just any backbencher. In this sense, this story is more than ‘merely’ local news.

Glen represents a constituency that has elected a representative from his party for the past century. Under the UK’s ‘first past the post’ system, Glen is pretty much guaranteed the job for as long as he wants it, barring revolution and personal scandal.

Glen recently became the longest-serving Junior Ministry in history. Given his background in management consulting, the path taken by most MPs when they choose to retire from politics, and the fact that his responsibility has been the financial sector, whenever he does decide to leave politics, he’s minted. This is both national and local news.

Glen’s voting record is a perfect record of perfect obedience. Anyone ‘on the payroll’ as a government minister is expected to vote as instructed by the government whip, but Glen’s record of going along with what his party bosses instruct him to do (as opposed to what his voters may want) is unblemished.

So you can see why it was such a bombshell when this über-loyalist suddenly discovered that he’s reached his personal Rubicon. After years of being just fine with everything, he’d reached his own point of no return.

A couple of days before, he’s announced, in a Tweet and nothing else, that he could no longer serve what he now saw as a corrupt, incompetent, out-of-touch government. These are our words, not his, but Glen’s letter of resignation heaped such emollient praise on his former bosses you might find it hard to discern why he was actually leaving this sinking ship. That last phrase was one of ours too, of course.

So now you have an idea of the context. Local bombshell. Certainly local news, and much more. What do the constituents think?

The subject of the article, therefore, could not be more exemplary in its service to local democracy and accountability. Holding power to account, and speaking truth to power are two of the traditional roles of journalism, including local news, in keeping our politicians honest, reminding them that they’re our servants and not our masters. In theory, they should be representing the interests of all their constituents, not a part of them, or – heaven forbid – their own.

But what happened next?

So Far So Good – What’s Wrong With The Journalism?

The report starts by asserting:

THE resignation of MP John Glen from his role within the Treasury department has led to mixed reactions from Salisbury residents and councillors.

While several residents have taken to social media to support Mr Glen’s decision, others have said it is “too little too late”.

The rest of the article is an apparently unscientifically assembled ragbag of quotes from social media. This should provide the uniquely local flavour, the familiar voices and faces, that make local news local news.

From a corporate perspective, the benefits of this type of ‘journalism’ are evident. It’s cheap. Specifically:

For anyone concerned about journalistic ethics, the problems are equally obvious:

But what about the rest of us?

If you find this surprising, want more on the bigger picture stuff, and more detail on why this endangers effective climate activism, see the See Through News Newspaper Review Project.