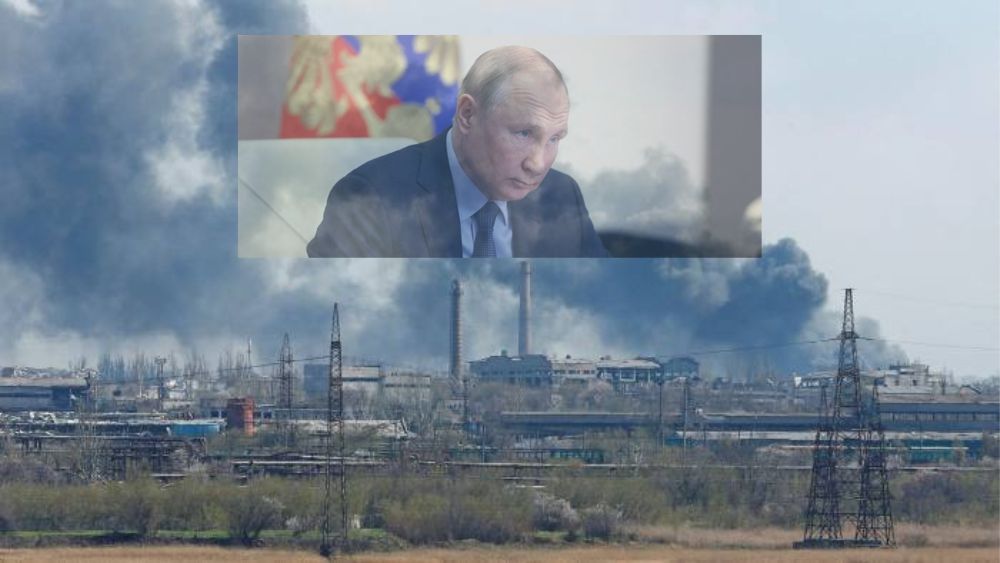 What Putin’s invasion, and the West’s reaction, tells us about the struggle for carbon drawdown

War lurches in unpredictable directions. More so, when the person driving events is as inscrutable, amoral and possibly deranged as Russian President Vladimir Putin.

See Through News has nothing to add to the avalanche of reporting, swathes of commentary and thickets of predictions following the renewed outbreak of war in Europe.

Our only contribution to this confusing cacophony is a brief big-picture observation. We’re confident, unfortunately, that what we have to say won’t be overtaken by events.

This is because it relates to power structures that are so deep-seated and intrinsic to the way we’ve come to govern ourselves. It will take a lot more than war in Europe to chip away at their resilience.

The Three-Headed Beasts is See Through News’s working model that guides our various projects.

Simple, even simplistic, this short fable is not a perfect representation of all the complex, dynamic matrices underpinning geopolitics.

Still, we’ve found it to be an effective model for understanding our problems and our solutions.

A reminder of its premise:

Not long ago, in a world the same as our own, lived Three-Headed Beasts.

Each Beast had a Government Head.

To one side, a Business Head, to the other, a Media Head.

The Government Head could control the other two, but rarely did.

Below the neck, Heads were joined by Power.

Below the belly, Beast was joined to Beast.

The Beasts all wallowed in the Money Mire.

This power structure’s robustness derives from the fact there are so many Beasts. Each Beast is connected to all other Beasts, beneath the Money Mire that nourishes them.

This interconnectedness is what makes decapitating or defanging one Head of one Beast, or even an entire Beast, ineffective in the long term.

Cut off a Head, and it never takes long before all those sub-Mirene tendrils reconnect and it grows back.

To shift from the metaphorical to the real world, this is what we’re now seeing unfold on the eastern flanks of Europe.

The Beasts At Work over Ukraine

To convince us to act against our own interests, Beasts need an Enemy Beast.

The Cold War provided a neat Capitalist/Communist dichotomy, but since the fall of the Berlin Wall, Beasts on both sides of the divide have been scratching their Media Heads to clearly define The Enemy Beast.

Most have settled into some version of the Democracy v. Authoritarianism narrative.

Post-globalisation, this has started to play out as civil war as often as cross-border conflict: Democrats v  Republicans, Remainers v Leavers, the Woke v…the other Woke.

When the ‘Us’ is not Our Great Nation, and the ‘Them’ isn’t Those Foreign Scum, the fog of war starts to clear.

That’s the big trick. And selling us that narrative is why the Media Head is such a critical part of this Trident of Power.

Which brings us to Russia and the Ukraine.

Examine the details of the ‘sanctions’. Even if you’re not a City tax lawyer or an accountant to a High Net Worth Individual, imagine the loopholes you can think of off the top of your head.  HNWIs used to be known as The Rich, until the Media Head thought that was looking a little dangerous.

It’s not that sophisticated, requiring only some re-casting of familiar roles.

Think of any Hollywood movie about a Corrupt Foreign Regime, substitute Our Democratic Establishment, then play Spot the Difference.

Try replacing ‘cronies’ with  ‘chumocracy’, ‘rubber-stamp assemblies’ with ‘partisan politics’, or ‘Rule by Law not Rule of Law’ with  ‘the flexibility afforded by our unwritten constitution’.

Then see how different Democracies and Autocracies look.

The Beasts are in charge of both. More links them than separates them.

What does this have to do with the See Through News Goal of speeding up carbon drawdown?

The narrative over Russia and the Ukraine shows why the Beasts present such a formidable obstacle. If the solution were as simple as backing Democracy over Autocracy, carbon emissions wouldn’t have rocketed following the Cold War.

Any attempts at Government Regulation to restrain Big Oil would have been mantled, not dismantled.

Global Heating is now widely acknowledged. Links between the increase in ‘natural’ disasters and the rise in average global temperatures is less contested.

But there’s still a huge disconnect between this narrative and, say, the coverage of Russia’s military action in Ukraine.

The Nord Stream 2 pipeline will double the volume of natural gas delivered from Russia. Germany’s decision to bring it into diplomatic play is indeed significant, but why did it take the invasion of Ukraine to make it happen?

Follow the Money, and it’s no surprise that fossil fuels underpin the entire news agenda.  Even in the Digital Age, we need to stay warm, move around, and make things, so Big Oil has lost no power.

Forget, for a moment, that fossil fuels drive global heating. As a thought experiment, imagine the geopolitical consequences of every country, no matter its size, being self-sufficient in renewable energy.

What would the implications be for fossil-fuel based economies like Russia, Venezuela or Australia?

Or for fossil-fuel-dependent economies like Japan, China or most of Western Europe? How often would Iraq, Iran and Saudi Arabia feature in our news bulletins?

Ignore the patriotic bellowings of the Media Heads, and see the gears in motion.

Tune out the principled rhetoric about ‘doing the right thing’, and note the volume and source of political donations.

See who’s attending the fundraising parties, or providing lucrative second jobs for politicians in power. Or first jobs for those recently in power, or close to it.

Follow the flow of ‘dirty’ money entering respectable institutions in London, Zurich, and the Cayman Islands, and see it emerge, neatly pressed and ironed, pushing up property prices beyond the reach of most young people with steady jobs, or increasing the multiples by which CEOs out-earn their employees.

But What Can We Do?

This is no cry of despair, but a call to action.

The Heads of the Beast are neither invulnerable, or immune to our will. They’re just very good at distracting and misdirecting us.

Our best way to mitigate the worst effects of human-induced climate change is to clearly identify Whose Ear to Bend and How To Bend ‘Em.

The good news is that because this power dynamic works everywhere, so does the solution. Leaders, whether democratic or autocratic, can’t defy the Will of the People indefinitely.

At some point the flag-waving and finger-pointing stops working. When it does, the consequences are far more dire for Autocrats than for Democrats.

Savvy Autocrats may wind up in exile in some Middle-Eastern petro-state, with only their plundered billions to comfort them. They might still rub shoulders with fallen Democrats, whose miscalculations deprive them of power, but come with the consolation of lucrative speaking tours, consultancies and lobbying.

But if Autocrats over-reach, they risk paying for it with their lives. Without the safety valves provided by elections, miscalculation could mean ending up dangling by the neck in the Main Square.

The near future will determine whether Putin ends up a Bigger Beast than ever, in exile in Saudi Arabia, or suspended in Red Square.  But the Big Picture won’t change unless he’s replaced by something other than The Next Three-Headed Beast.

It may not lead to Peace of Earth, but Speeding Up Carbon Drawdown could be the next best thing.