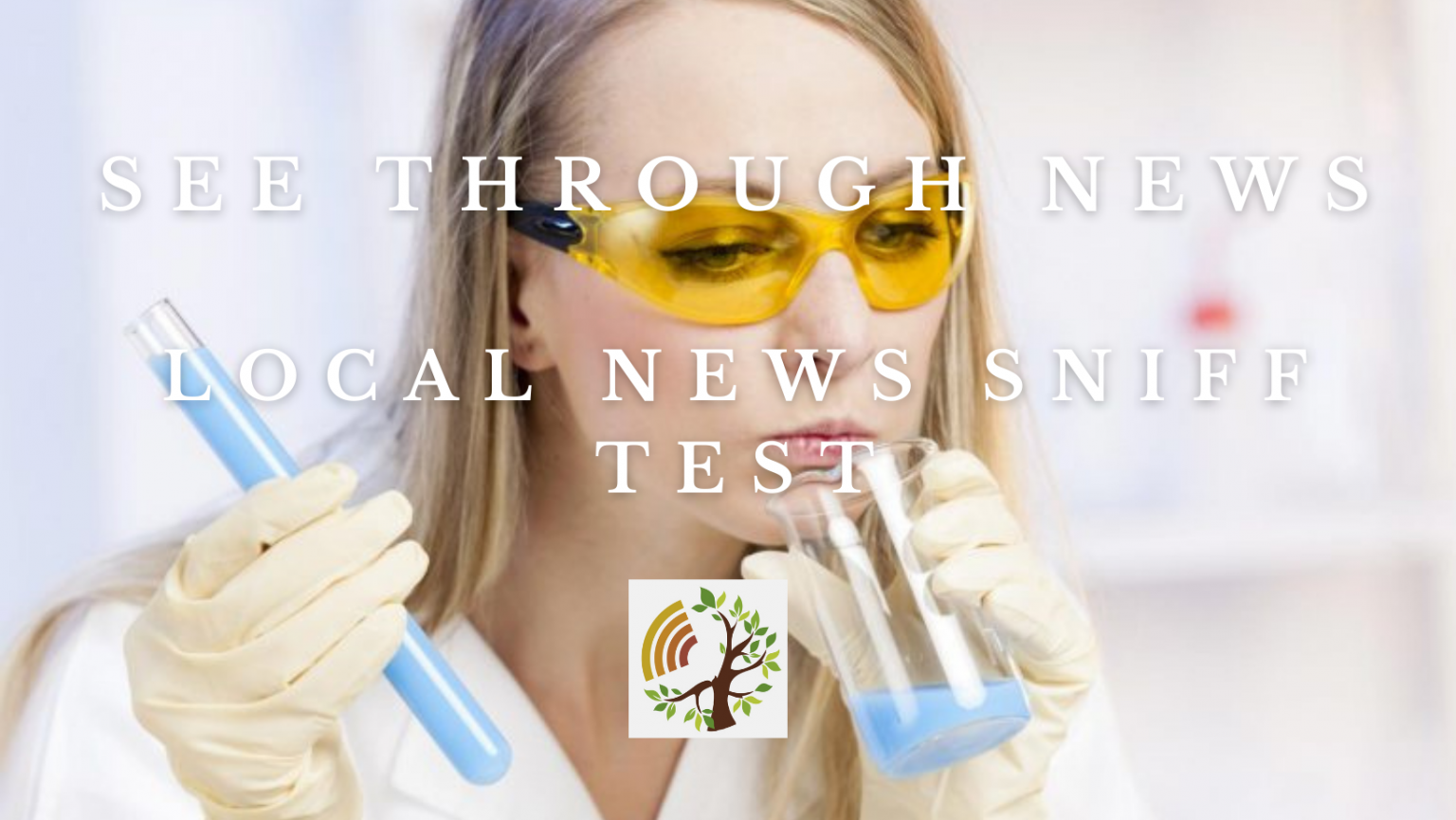 The problem with most local newspapers

Our public media awareness campaign, the See Through Newspaper Review Project, outlines the under-reported problem of a handful of conglomerates owning the vast majority of local newspapers.

We explain what’s so dangerous about this stealth corporate takeover, and its negative impact on effective climate action and our Goal of speeding up carbon drawdown.

They key point is that these once-cherished local titles have now been zombified by sacking experienced local journalists living in their communities, and filling the pages with robot-written articles, concealed advertising, and user-generated content.

This articles describes two fun tests See Through News has devised to apply to your local newspaper, and score its journalistic ethics. They expose the space-filling dirty tricks used to blur the line between journalism and advertising.

Like all See Through News projects, these tests are open source, free to use and share, and designed to promote media literacy in a fun, accessible way. They are:

The Sniff Test is designed to determine whether your local paper (and/or website) is:

The 3-step test takes a few minutes, and gets faster with practice.

The mark out of ten will reveal if your local paper is:

May be on the way out. Hold at arm’s length.

Oooft. Bag it before you bin it.

Here’s our (provisional) list of categories and points assigned. 1 Point:

Please try our Sniff Test to score your local newspaper, and post your results here, including a link to the source for peer review.

The Sniff Test and the Smell Test share the same aim. They quickly determine whether your local paper/website is:

Now we could have said:

But chose not to, because this is not an academic analysis. There are plenty of those already, all largely ignored.

We follow the See Through News house style: colourful, playful, straightforward. If we want to engage as broad an audience as possible, we need to follow our strapline: Fun. Friendly. Factful.

Take any news story from your local newspaper/website at random.  Work out if it was it mainly written by:

And That’s the Sniff Test Score.  The higher the score, the more ethical the journalism.

If you’re in any doubt about how to distinguish 1, 2 and 3, read on. More can be found in our Newspaper Review Project Facebook Group, or pilot Review Facebook Group.

How did your local newspaper do?

Assigning Categories improves with practice. Once you get used to the idea ,the Sniff Test should take a matter of seconds, and the Smell Test less than 5 minutes.

For the Smell Test, each article should take a maximum of a minute or so to assess, but many can be done at a glance.

Now for some top tips on Robot-spotting, and why it matters.

How To Spot a Robot

Written by a Robot’ is a colourful way of saying ‘generated by an algorithm’.

The main two Robot giveaways are Style and Subject.

As you scan an article, do you some  times find your eyelids dipping, impatient to pick out the relevant numbers, instead of lingering on delightful turns of phrase or local features?

If so, chances are it was written by a robot.

It will be as dull as ditchwater.

As bland as blancmange.

All the cut-through of a cookie-cutter.

As lively as a lecherous Lothario off his lithium.

Robot journalists can’t yet reliably generate orotund phrases in context. But it won’t be long before they can.

A robot writer is unlikely to use the word ‘orotund’,. If it did, a robot editor would probably replace it with a more common word. ‘Fancy’, maybe. Or ‘florid’.

In this particular case, you and other human editors may agree. But what if all local newspapers end up using the same algorithm?

Would any robot generate a headline like ‘Panic as Man Burns Crumpets’?  That’s the title of a bittersweet memoir recently published by British local news feature writer Roger Lytollis.

The book lays out with painful clarity the transition of the Cumberland News from shining light of local journalism to anodyne advertising platform.

Such corporations are working with AI developers on robot editors to adjudicate on such matters as using ‘orotund’ or ‘fancy’.

What do you think? How precisely can you draw the line between ‘colourful’ and ‘pompous’?

In isolation, replacing ‘orotund’ with ‘fancy’ may be a good editorial decision in this case, but that’s not the point.

As it improves, AI will get much better at both writing and editing. Robot-spotting will get trickier. Gannett newspapers are already full of robot articles, automating the low-hanging fruit of replacing finance and sports reporters. Why? Money.

Robots are already pretty good at the former. AI boffins are working hard at the latter.

At the cutting edge, GPT-3 developers have opened up the possibility of unleashing such a mega-tsunami of plausible robot-written content, they’re worried it might break the internet.

GPT-3’s developers seem to be trying to keep their genie in the bottle, but the past few thousand years of human history don’t provide many successful examples of controlling technological progress.

Some computational linguists, unimpressed by the ‘intelligence’ displayed by GPT-3’s Big Data form of AI, have dubbed it no more than ‘stochastic parroting’.

GPT-3’s AI credentials may be as irrelevant as its creators efforts to contain it. A few years back a couple of exotic pet parrots escaped their London cages, and now huge flocks of parrots can be seen in the city’s parks. And they’re only real world parrots.

For the moment, Gannett’s bean-counters, and their software engineer sidekicks, appear to have no qualms about the prospect of unleashing a tsunami of poor quality content on the internet.

They’re too busy embracing this exciting new cost-cutting strategy – or as they might put it:

Maybe their robo-editors will replace that with ‘robot-written content’, in the millions of robo-articles with which they flood across the internet..

For Robot- Spotters, the other giveaway is subject matter.

As Robot articles harvest local data from national datasets, they’re quite easy to spot once you know what to look for.

Any article in your local rag about trends in house prices, crime statistics, or, recently, Covid stats, are probably written by Robot.

If you’ve ever used mail merge features, or dabbled with macros, you’ll get the idea. When you see a headline like:

Massive agglomerators, like Gannett, are working with AI developers to cut costs through automation.

This applies to both the ‘curation’ role that used to be filled by editors in selecting relevant stories for an individual reader, and to news articles themselves.

Replace an editor with a robot, and you cut one human salary.  Replace an entire class of reporters, and you could cut hundreds, thousands for the bigger conglomerates of human salaries.

Clearly, this is of interest to the bean-counting hedge funds, now the ultimate owners of so many local titles.  Ignoring such cost-cutting potential would be a dereliction of duty to their investors.

When it comes to replacing reporters with robots, the generation of sports and finance reporting is just the beginning.

They’re basically numbers strung together with grammatical sentences, which current AI is getting quite good at. More topics will follow.

The push behind the automation of journalism is obvious. If you can’t raise revenue, you have to cut costs.

Robots are much cheaper than humans. They work 24/7, don’t get sick or unionise, and are much easier to manage.

The prose they generate is currently quite easy to spot as it is utterly bereft of vivacity, colour, elan, piquancy, local flavour, or any sense of community/landscape.

The byline is the name of the reporter at the top of the article following the word ‘by’, usually accompanied by a smiling mug shot .

A byline was once valuable journalistic currency.  It meant it was Proper Local News. Real reporters employed by the paper got them, agency reports didn’t.

For sub-editors writing in their free-time, with dreams of becoming reporters, freelancers looking for their big break, or new recruits desperate to make their name, their first ‘byline’ was a big big deal.

Post-internet, this changed. Knowing that a byline implied authenticity, papers began to plaster them on any old article to boost credibility.

As advertorials stopped being labelled as such, and advertising began its creeping dominance over journalism, this currency became further devalued.

For a while, a byline retained its basic, most functional meaning – that it was written ‘by’ someone. That someone, increasingly, may have been a corporate PR, but at least they were human.  No longer.

Don’t be fooled by the appearance of a byline and smiling photo adorning the top of a robot-written article.

As we demonstrate in our pilot Review Group, conglomerates like Gannett no longer have any compunction about pretending robot-written articles were written by humans.

This must be pretty humiliating for the human involved, who’s trained for years as a professional writer.

Assuming, of course, the person represented by the byline and photograph actually exists.