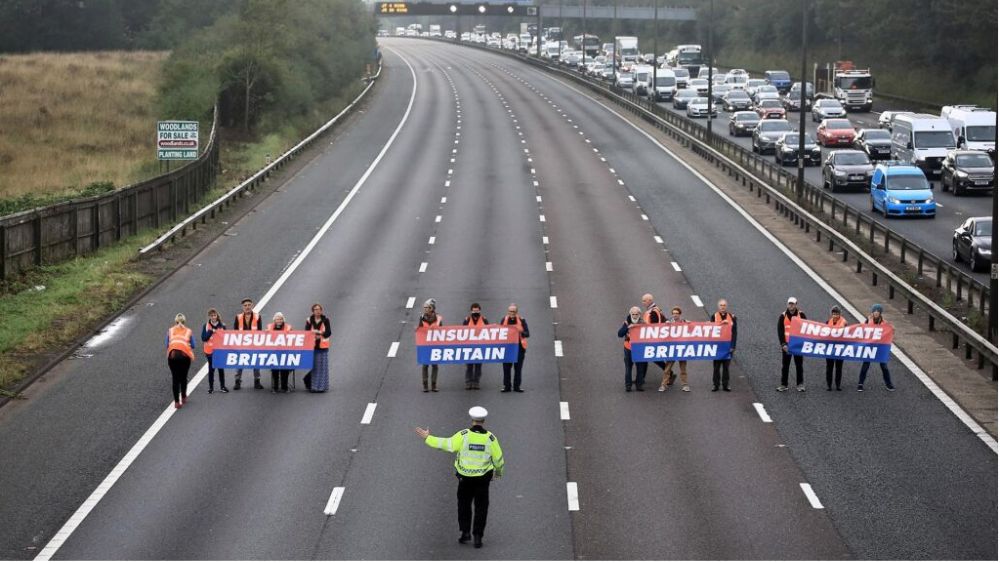 Is Insulation now the Right Front for Building Climate Activism?

All filler, no killer

Insulation has, until recently, been the most boring of all the carbon-reduction methods.

Effective, certainly. But filling cavities and lofts, and applying cladding, has never quite caught the public imagination like electric cars or fracking.

Nor, so far, has reducing energy demand been a particularly attractive bandwagon for politicians. You can’t put your name on rolls of insulation like you can have an oil rig, refinery, road or bridge names after you.

And we can safely assume the lobbying power of Britain’s cladding industry has never been at a lower ebb, following their role in the Grenfell Tower fire disaster.

Protest has got building on the agenda, but at what cost?

Over the past few months, Insulate Britain’s direct actions in glueing themselves to motorways has changed that, though on balance their message rather got muffled by their means.

Giving people a reason to grumble about traffic delays was always going to be a high-risk way of getting the government to regulate on home insulation. Arguably, all the negative publicity made it easier for government to ignore and dismiss their demands.

Maybe only time will tell, but as always, the problem with this particular crisis is that we really don’t have any time to spare.  Complacency, denial and la-la-lahing has already baked in 1.5C, and our governments are showing no sign of appreciation the scale and speed of effective climate action required to limit it to less than 1.8C, if that ship hasn’t already sailed.

It surely won’t be that long before those involved in jailing these climate activists start regretting their enthusiasm to criminalise protest. Maybe already, explaining themselves to their grandchildren, they may be starting to think they might be on the wrong side of history. But in the meantime, more carbon is finding its way from the ground into the sky and the sea, and the focus of nearly all governments remains fixed on increasing or replacing supply, and not on reducing demand.

At any rate, insulation is certainly becoming sexy. Following the Insulate Britain motorway-glueings, court action and prison sentences, Britain’s architects are finally getting in on the act.

The Architects Journal has put its heft behind RetroFirst, a campaign to prioritise insulating existing building stock.

Even the venerable RIBA has put its name to its oddly-named Homes for Heroes push to insulate Britain’s draughty interwar housing.

The issue of insulation, like that of oil-state dependence, and fuel poverty, is still subject to ‘silo’ reporting. An entire mainstream news bulletin can report on:

What can we do to promote effective climate action on buildings?

We’ve set up See Through Building to join these dots, on a variety of social media platforms, to maximise accessibility.

There’s the See Through Building Playlist on our YouTube channel.

Also via this Facebook group, See Through News is seeking to provide a forum for all the stakeholders, as we seem obliged to call ourselves, in the building business to come together to identity the most effective way to reduce the most carbon quickest.

in the context of the See Through News goal of:

Speeding Up Carbon Drawdown By Helping the Active Become Active.

This website is also a starting point for this community, not just for the Zuckerphobes.

See this post for free resources that from the groundwork for the multi-platform forum we hope See Through Building will become.