ESG, CSR & STN: What Big Business Do-Gooding Can Do For Us, and Vice Versa 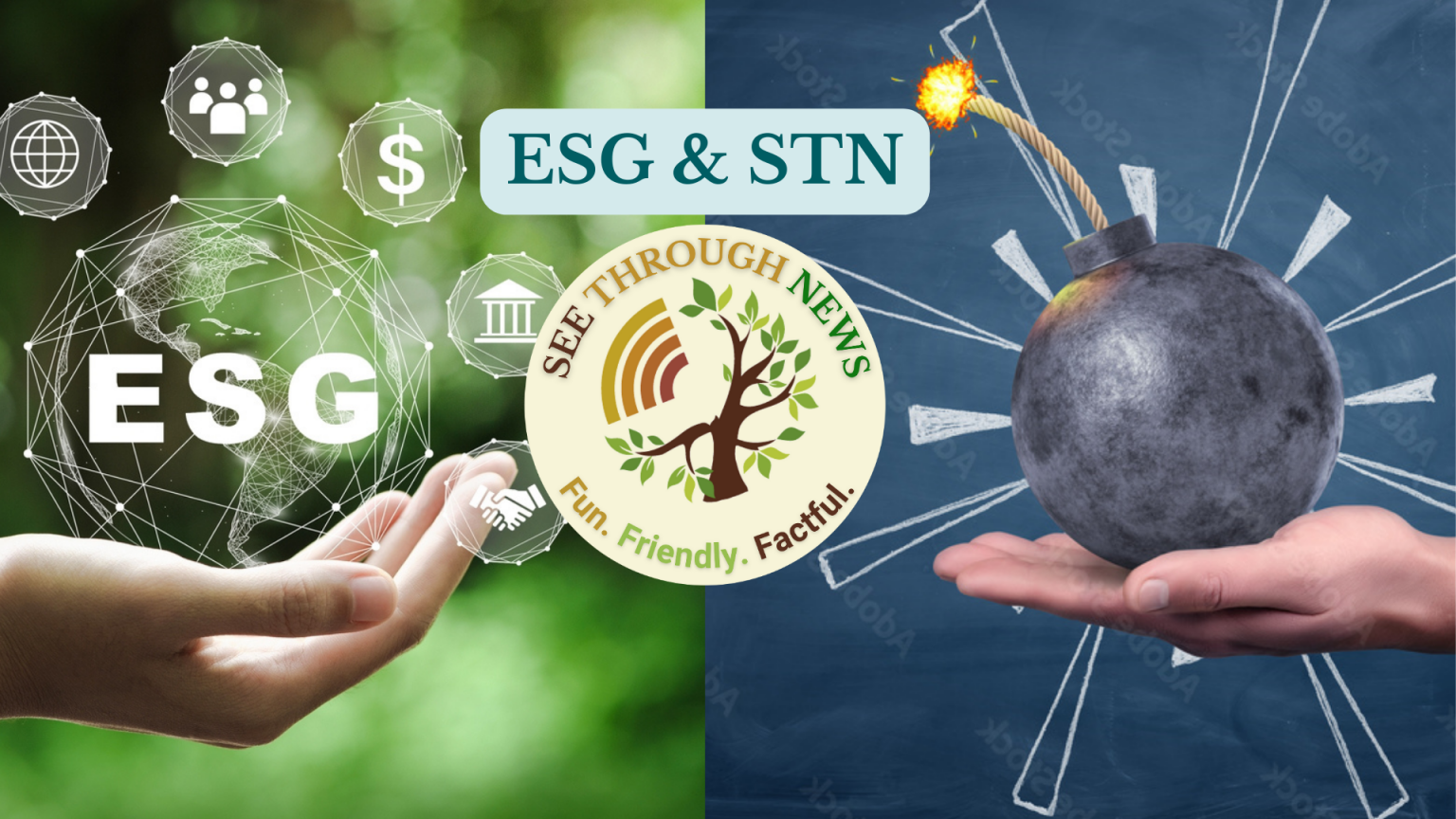 Corporate capitalism is starting to ‘get’ the climate crisis- here’s our guide to sorting the Greenwashers from the Green Good Guys.

Does ‘ESG’ ring a faint bell? Has it entered your consciousness, maybe while skimming recent financial pages headlines? Have you heard of it, but would be hard pushed to explain what it actually means?

Here’s our take on what it is, what it isn’t, and how it might be of great mutual benefit to both corporations and See Through News.

For a start, ESG stands for Environmental, Social and Governance.

This article points out what different things this can mean to different people, including some that ESG folk might not recognise, but first things first. Definitions.

If this sounds familiar, you might be thinking of Corporate Social Responsibility (CSR), which has been around for a while. The same website defines CSR as:

a self-regulating business model that helps a company be socially accountable to itself, its stakeholders, and the public

While we’re at it, we should mention another corporate neologism unfamiliar to most folks. Impact Investing is often found in articles discussing ESG. Over to Investopedia again:

The Rights & Wrongs of ESG

So much for the jargon-busting. You will have gathered that ESG, CSR and Impact Investing are all different attempts corporate capitalism has come up with to define itself in terms other than maximising shareholding value.

Discussions of ESG’s morality abound, and tend to fall into three categories:

For what it’s worth, See Through News (STN) tends towards the third view.

So far capitalism has been the driving force behind the climate crisis. It might yet be able to become part of the climate solution, but this is very unlikely to happen via self-regulation. In any case, we no longer have time to wait and see.

A more proven route, historically, is for capitalism to be obliged to do the ‘right thing’ via government regulation.

We see this conclusion as pragmatic, not ideological. See Through News is only interested in finding the shortest available route to measurably reducing carbon.

That’s quite enough about rights and wrongs. As pragmatists, we’re more interested in what ESG can do for STN, and vice versa.

In the last few years, as ESG has rapidly replaced CSR as the corporate buzzword, but it’s often confusing because it inhabits two quite separate worlds. We’re labelling them ‘external’ and ‘internal’.

If you’re looking for an accessible and fascinating introduction to ESG’s potential and problems, we highly recommend this Tortoise podcast.

‘The Fix’ tells the story behind one of the biggest and most recent corporate abuses of ESG.

This is what we’re calling ‘external’, or maybe ‘primary’, ESG. This is the ESG the Investopedia definition was referring to. It has suddenly become central to how big businesses values themselves, and how they ask investors to value them.

Even if you’re unfamiliar with this terminology, you can imagine the problem.

Big corporations are awash with money and staffed by people accustomed to using no other metric than profit.

It’s clearly naive to expect them all, overnight, to embrace a new metric, and to see ESG as anything other than another loophole or shortcut to profit. Bad actors abound.

Bad actors, like Deutsche Bank featured in The Fix, abuse ESG for profit. For them, it’s a grifter’s gift that keeps on giving, Greenwash Plus.

Not only does ESG earn you PR brownie points, but it conjures up a hot new selling point from thin air. Badge a fund ‘ESG’, and you get to slap on a whole new premium, at negligible cost. No wonder big business is embracing it.

It’s like a coffee company charging extra for ‘FairTrade’ beans, when it neither knows nor cares how they were actually grown or traded. For such greenwashers, Do-gooder badges represent pure margin.

They’re widely abused, but have worked just fine for producers. Consumers are prepared to pay a premium for products that carry such labels. They offer an extra baby boomer margin, by providing an outlet to discharge their climate consciences without having to actually change anything they do. A gimme surcharge. A guilt gilt.

We’re not saying all corporations are greenwashers. Just because bad actors take advantage of well-intentioned, but intrinsically unreliable systems, doesn’t mean all big business is bad.

Corporations are run by intelligent people, who understand the world. Most of them have children and grandchildren who ask them increasingly difficult questions about what they do at the family dinner table.

Let’s call these responsible capitalists the Green Good Guys. They’re sincere about using ESG to do good in the world, and keen to demonstrate that capitalism ain’t all bad.

ESG, then, can be a force for climate good or evil, depending on the sincerity of those propagating it.

It’s like blockchain. Blockchain is a neutral technology, a mathematical tool that can be used for good or bad, but which risks being tainted by its early association with cryptocurrency, a good old-fashioned scam dressed up in tech clothing.

Like blockchain, Greenwashers like those described in The Fix risk strangling ESG at birth in the public consciousness.

But how can we tell the Greenwashers from the Green Good Guys? This is External ESG’s existential problem.

It’s why organisations like the Impact Investing Institute strive to give ESG a good name, and find market-driven ways for capitalism to actually reduce carbon and do other other social good. Even if it costs them. Even if they’re not forced to do the right thing via See Through News’s preferred shortcut, government regulation.

Billions of dollars are at stake in how it’s applied, which accounts for its abuse by bad actors.

This External ESG world is fascinating, important, interesting, and rapidly-evolving.

But not of immediate, direct interest to See Through News’s methodology for measurably reducing carbon.

There are richer carbon-reduction pickings in what we’re calling ‘Internal’, or ‘secondary’ ESG.

In one sense, it’s quite separate from the External version, and should probably have a different name to avoid contagion. Pure-as-the-driven-snow companies can get stained if they share a tub with Greenwashers.

In fact, until very recently, ‘Internal ESG’ did have a different name. It went under the rubric of Corporate Social Responsibility (CSR).

CSR’s primary role was internal. It served an in-house function, not an external, investor-oriented role.

CSR took the form of things like Community Action Days. Company employees would be paid to take a break from the daily office grind, don company-branded hi-vis jackets, and be highly visible in their local or Corporate communities doing things that contributed to Society.

So why has CSR fallen out of fashion, and been replaced by ESG?

What’s missing from old-school CSR is the most important, urgent and threatening crisis of all.

That’s why they had to include the ‘E-word’.

Putting the ‘E’ into ESG

As the reality and impact of global heating became harder to ignore, corporations realised CSR fell short on what the public, some investors, and their employees most cared about – the Environment.

This is behind the sudden switch from CSR to ESG. It’s why companies that have dedicated budget, staff, and annual report sections to ESG are now scrambling to find suitable projects to deliver the ‘E’ bit.

On the face of it, corporations adopting STN projects to tick their ESG boxes looks like win-win, no?

Risks of getting into bed with greenwashers

In the absence of money, a zero-budget operation like See Through News has to be particularly careful about guarding its reputation. With no funding or bank account, integrity is our only asset.

But so long as our projects continue to be driven by principle, and remain open source, radically transparent and zero-budget, they’re pretty armour-plated against corporate tampering.

If corporations want to use our projects on a voluntary basis, where’s the harm? The projects are all designed to be steps towards measurably reducing carbon, so they should work whoever uses them.

Besides, they’re all open source, and available for free online. Corporations don’t even require our formal blessing or endorsement to adopt them. Help yourselves. Take one extra for a friend. Spread the word.

In this sense, corporate motivation for volunteering to use See Through News projects doesn’t actually matter. STN projects are designed to reduce carbon, and will work whether volunteers are motivated by greenwash or genuine climate concern.

There’s one snag, though.

Corporations are used to paying outsourced third-parties to deliver their ESG deliverables. This makes sense, as it enables them to demonstrate their green bona fides to corporate auditors, but it does present an unusual dilemma for an operation like STN that makes a point of being zero-budget.

What if the best way to satisfy the growing corporate demand was to find a way to help them stuff money in our pockets?

This would require STN to find some arms-length way of allowing companies to invoice STN-trained trainers to deliver our projects in an ESG context that their accountants would recognise.

Well, so long as we continue to be radically transparent about this, and don’t allow corporate involvement to impact the integrity, design or nature of the projects themselves, where’s the harm?

Indeed, this might also be the answer to a major challenge to See Through News – how to develop a more diverse volunteer base. And in particular, how to involve more young people.

The Brains Trust that has driven See Through News through its initial development stage includes world experts in various fields who can afford to volunteer their hard-earned expertise. They have been a huge asset to See Through News’s growth, but currently have two downsides:

That’s why we’ve long mooted the notion of ‘paid volunteers’. Young people don’t lack any motivation to do effective climate action. After all, they’re going to have to live through much more of the disastrous consequences of their parents addiction to fossil fuel.

But most lack the means. They’d love to invest their skills and energy in STN projects, but need to stack shelves to pay the rent.

As one stale, male, pale member of the See Through News Brains Trust, a veteran corporate sustainability consultant whose 30-year reputation depends on spotting the Greenwashers from the Green Good Guys, observes:

‘pretending to clean someone’s windows’ while in fact scoping out the building with a view to breaking in and stealing valuables, is still actually cleaning the windows.

Of course, there are still plenty of climate-sceptics out there for whom anything that mentions the E-word is evidence of communist agitation.

Such a stance requires wilful ignorance of overwhelming scientific evidence and real-world outcomes, so there’s never been much point in paying attention to that kind of criticism.

But getting corporations to pay STN volunteers to deliver unadulterated STN projects to measurably reduce carbon, via a separate commercial corporate training company, could be win-win-win, no?

Which leaves the world of rational, evidence-based critics of See Through News, to whom we pose the question…

…what could possibly go right?