How Beer Bottles Can Help Tackle Our Climate Crisis 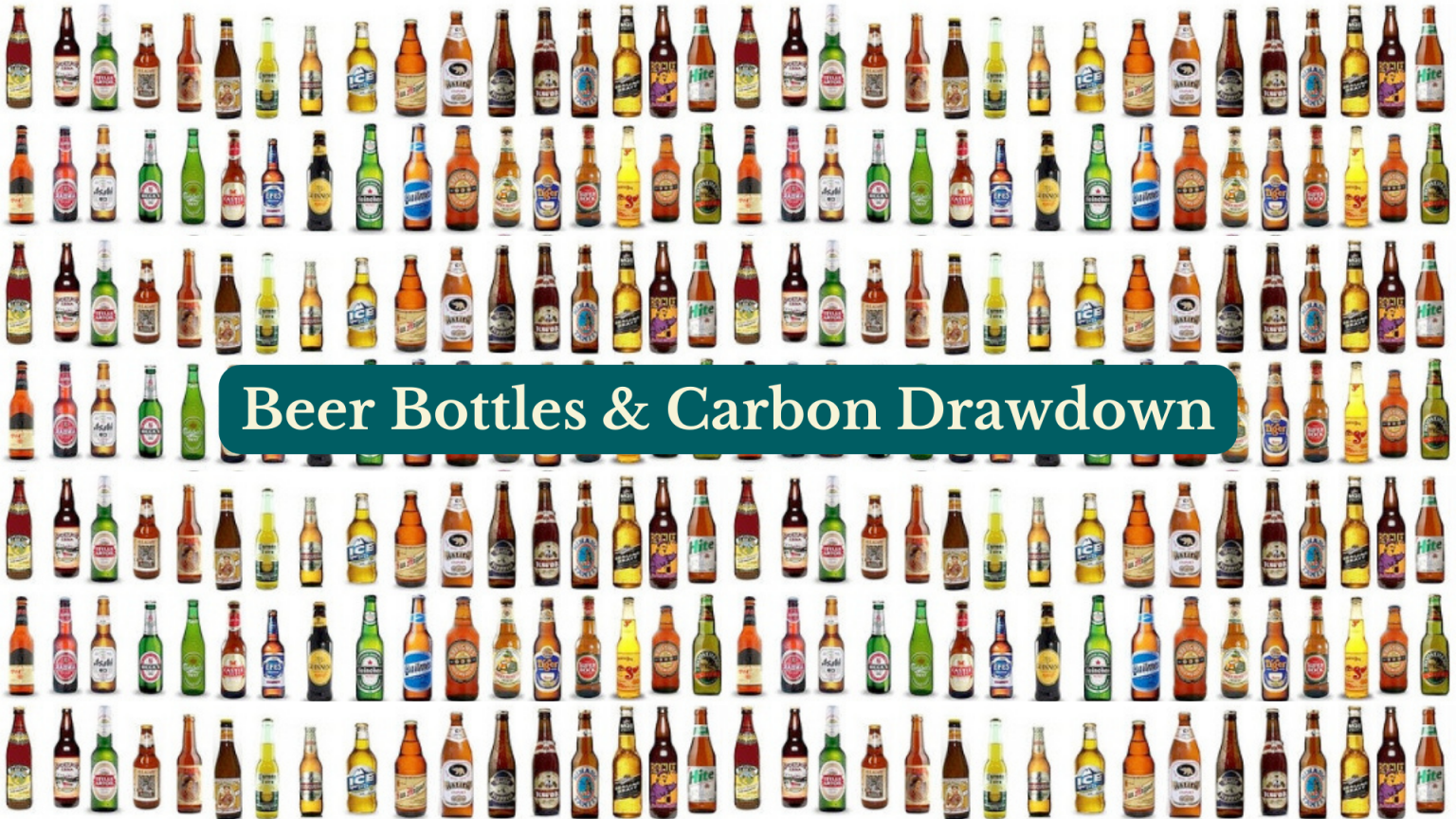 A Brief History of Branded Beer

Manet’s 1882 ‘A Bar at the Folies-Bergère’ is famous as a landmark of Impressionism, but also for art’s first depiction of a trade mark – Bass beer’s red triangle.

After millennia as a generic commodity, beer was among the first products that modern advertising embraced. When the UK’’s Trade Mark Register Office opened for business on Jan 1 1876, Bass’s red triangle was literally the first brand registered under the world’s first trademark legislation.

From William Bass’s striking geometric logo at the front, to the small print asserting his unique legal status on the back, beer has been at the forefront of modern branding and consumerism ever since.

The legal print is small because it conceals an inconvenient truth for fans of particular beers.

Most of those distinctive brands – the ‘Mexican’ one, ‘Indian’ one, ‘Australian’ one etc., with their marketing driven by associated sombreros, kingfishers and laid-back Ozzies, are brewed under licence in the country where it’s being drunk. Burton-on-Trent, ‘the Brewery of Britain’ and home to Bass, once brewed one pint in every four downed.

Germany’s Beer Purity Law famously permits only three ingredients: water, barley malt & hops. Given that what’s inside the bottles barely differs, and any variations are so small, how did beer get so complicated?

Consider, apart from the small print on the label listing minor recipe/ingredient tweaks trademark claims, what distinguishes one beer brand from another?

Now examine this picture – how many brands can you identify from the size, shape and shade of their bottles?

Along with label design, a distinctive glass bottle is the most striking way a beer brand can distinguish itself from its competitors.

Branding is about defining and accentuating differences, yet there’s one feature that all beer bottle labels share these days – a prominent ‘recyclable’ logo.

But ‘recyclable’ is greenwash.

‘Recyclable’ diverts responsibility from the producer to the consumer.

‘Recyclable’ still counts if the bottle is put straight into a landfill site.

‘Recyclable’ dodges the ‘Polluter Pays’ principle, permitting brewers to perform their advertising trickery with no regard to what we now know are the two most important questions we should ask of any human activity:

Q1: How much carbon does it generate?

Q1: How much carbon?

If brewers were to take responsibility for the carbon footprint of their product, either on their own initiative or coerced by government regulation, how much carbon could be saved?

See Through News is far from the first to ask Q1.

As the corporate world wakes to the magnitude and urgency of the climate crisis, ‘carbon auditing’ is a fast-growing and critical business. Quite right too.

If we can’t measure something, how can we know we’re reducing it?

Carbon auditing is increasingly sophisticated, but lacks a Gold Standard. This is understandable, as claims of carbon reduction will always by nature depend on inexact science. There must be an objectively truthful amount of carbon emitted in any current human activity, but claiming any future reduction involves:

Proving a negative, and predicting the future, are two very slippery customers at the best of times. Any system based on such flexible foundations will leave plenty of room for bad actors to manoeuvre. Hence the failure, so far, of carbon trading and carbon credits.

But we shouldn’t give up just because something is hard.

Inside and outside the beer industry, many attempts have already been made to apply current carbon accounting metrics to beer bottles.

Here, hand-picked from a cursory noodle around the internet, is our own craft beer six-pack selection of beer bottle research.

Any of them could form the evidence-based basis for a prolonged rant on the subject in any pub discussion. For extra bar-room credibility, we’ve included links if you’d like to cite their workings:

These different answers reflect the complexity of carbon auditing, but also a dirty secret known to all statisticians. And to all bad actors, whether they’re politicians setting the terms of an enquiry into an embarrassing incident, or industries covering up inherent dangers about profitable products.

It all depends on what questions you ask.

These studies all analyse the same basic process – the life cycle of a glass beer bottle. Yet Conclusion 4 appears to contradict Conclusion 5. And what’s up with Conclusion 3, which suddenly brings beer kegs into the equation?

Such are the perils of carbon auditing, and why we need to understand it properly.

A good example of good and bad practice in carbon auditing is the The Scope Question.

A business that only looks at Scopes 1 and 2 can appear to be far less damaging than it really is.

Look only at Scope 1, and the host nation can feel pretty pleased with yourself. If you choose to measure things like recycling drink cans inside its stadium, or printing tickets on recycled paper, and nothing else, it’s not hard to award yourself (or pay someone to award you) a Gold (or Green) star.

Including Scope 2 risks taking the gloss off a bit. Add the emissions of the trucks that transported the soda cans, or even more awkwardly, the embedded energy of the huge concrete stadium you built just for this tournament, and your green credentials start to look a bit dodgy.

But consider Scope 3, and you’re screwed. How much carbon did all those spectators emit to get to your tournament?  Had you not staged it, they wouldn’t have come, so all those plane trips need to be factored in too.

For sports and music events, it’s an inconvenient truth that Scope 3 typically accounts for 80% of total emissions.

The Scopes issue underlines the challenge of responsible carbon auditing – so far as humanly possible, how can we consistently apply neutral, objective standards that encompass the widest possible definition, to every human activity? What would that elusive carbon auditing Gold Standard look like?

Anyone claiming to measurably reduce carbon, like See Through News, requires accurate and honest measurement of true emissions.

We’re working with carbon auditing experts to establish an unimpeachable, open-source, best-practice, gold-standard See Through Carbon Meter widget, that anyone can confidently use to measurably reduce carbon.

In the meantime, we’re looking for a case study to test our approach.

As with climate science, this complexity makes it easy for bad actors to use cherry-picking, nit-picking and other wilful obfuscations to distract ordinary people. We’d all much prefer not to change our behaviour, so carbon nitpicking has so far been a reliable licence for procrastination, laissez-faire and the other forms of wishful thinking that have created our climate crisis.

But a popular campaign needs a simple call to action. How can we understand the complexity of the calculations in all the studies listed above, and still pack a punch?

The polluting bunker fuel burnt by the container ships that transport our stuff around the world is, statistically, a way bigger problem than beer bottle carbon emissions. The problem with getting Unwilling Inactivists to adopt it as a campaign is that it takes place in the middle of our deserted oceans.

A CO2 molecule may obey the laws of atmospheric physics wherever, whenever, however and by whomsoever it was emitted, but when it comes to engaging ordinary humans, out of sight is out of mind. Humans are accustomed to solving problems by playing blame games, so we’re easily diverted by issues such as tribal affiliation, like nationality, social class, religion, gender etc.

That’s why we fancy the idea of building a carbon-reduction campaign around beer bottles. They’re:

A successful beer-based campaign – a beer-case study, if you will – has a potential long-term benefit that goes well beyond the immediate short-term value of its own carbon reduction.

If our beer-case-study helps Unwilling Inactivists become effective climate activists, it both

Empowering the world’s beer-drinkers could make a big difference to carbon drawdown.

Back to the future?

Remember that 1882 painting of the bored-looking Parisian bar girl?

140 years may seem like a long time ago, but by the time Manet painted A Bar at the Folies-Bergère the Industrial Revolution was already in full swing.

Archeologists reckon humans have drinking beer pretty much as long as we’ve been growing cereal crops, as long as 12,000 years. This means that for 99% of human history, we’ve somehow managed to store and transport beer in non-branded containers.

Carbon reduction often doesn’t require silver bullet technological miracles, or even re-inventing wheels. We can reduce an awful lot by simply remembering how we used to do things. The Good Old Days were, by and large, also the Low-Carbon Days. When we valued things more, we didn’t chuck them away.

The same logic lies behind our How To Live Without Plastic project. No need to wrack our brains about how to live without plastic, just ask old folks how they did things before the fossil-fuelled-inventions of the Industrial Revolution changed everything.

Before modern branding, most beer came in a standard shaped and sized bottle. Beer kegs still are. Each container is a standard size, interchangable with other brands, and simply need to be rinsed out and re-used.

Slapping a label on it is fine – we still need to comply with health-and-safety regulations, and individual brands will want to promote their distinctive qualities.

But once you prioritise carbon reduction, the notion that a brewer needs to make a new bottle every time it sells another 330ml increment of its product seems ridiculous.

Why not just revert to a tried-and-tested alternative that worked absolutely fine before the Mad Men took over?

Q2: How to reduce carbon? The Beer Drinker’s Call to Action

So much for the ‘how much?’ question. How about the second carbon question we posed earlier on – ‘how can we reduce it?’

Step 1 is a detailed carbon audit of the beer industry. Having examined all the available evidence, we can base our campaign on best practice.

Step 2 is deciding on the campaign’s call to action. Whatever it is, it must come with a clear carbon price tag, together with other options.

or our current favourite, the ‘5Bs’ slogan:

We’ll let you know which one we’re going with, once we’ve done the sums.

Having chosen our call to action, it’s…

See Through News’s global reach, international team of volunteers, and in-house resources are growing extraordinarily rapidly, but a successful campaign, even at local level, will require strategic partnerships with third parties.

Whatever the campaign strategy’s details, it will follow See Through News’s basic methodology: engaging, empowering, avoiding honking any green klaxons.

Some players will be willing, informed accomplices. Others will be inadvertent supporters who don’t even consider themselves to be ‘climate activists’ at all.

Ideally, the most effective influencers will think the idea was theirs all along.

Co-opting polluting industries, ideally without them being aware of it (or at least permitting them to legitimately claim public credit for authentic, non-greenwashed carbon reduction), is the shortest route to effective climate action.

See Through News is nothing if not pragmatic.