Alexa – How The Hell Did Amazon Make Us Pay Them To Profit From Our Privacy? 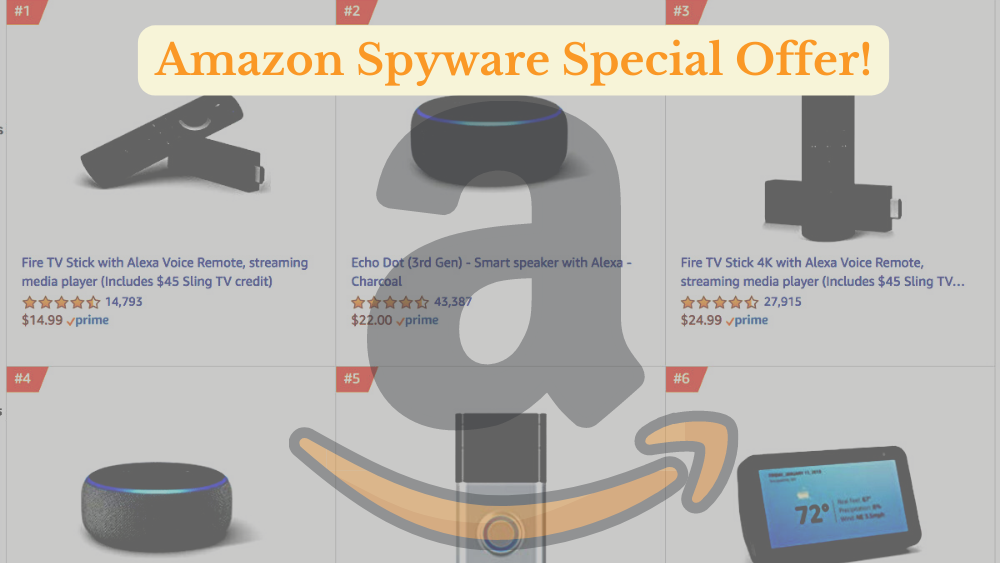 Why Our Silicon Valley Overlords matter

As a social media network powered entirely by volunteers on zero-budget, See Through News pays a lot of attention to our Silicon Valley Overlords.

Most of this attention is focused on Facebook, Amazon, Apple, Netflix, Google, Microsoft, the 6 big beasts that account for more than half of all internet traffic.

We need to understand them in order to exploit their ‘free’ infrastructure to reduce carbon, but they’re also case studies in how big business dodges government regulation.

These 6 big beasts are great examples of the power dynamics behind the combination of vested interests in Government, Business and Media that are obstructing carbon drawdown – as featured in our Three-Headed Beasts allegory.

As the flagships of untrammelled capitalism, AI, and social media, our SVOs form a large part of the carbon problem. They’re fundamentally advertising companies, trading access to our eyeballs for ad revenue, which is largely directed towards increasing carbon by persuading us to buy more stuff we didn’t need.

But SVOs, and social media, also have the potential to form a large part of any carbon solution. If by solution we mean the optimal mitigation of the world impacts of human-induced climate change…

So, See Through News keeps a keen weather eye on our Silicon Valley Overlords, and this article is about the world’s biggest shopping trolley, Amazon. And why it’s much more than a shopping trolley.

The Washington Post recently published a comprehensive, scary and timely interactive article on the innumerable ways Amazon is selling us devices it uses to spy on us, and how it monetises this data.

This is not quite true, actually.

They are numerable. The article lists them, thus:

Count how many you have in your house, how useful they are, and your reasons for buying them. Then read the article, and see how it makes you feel.

Shouldn’t Someone be doing Something?

For decades now, Amazon has been accumulating data about us in plain sight, pretty much unencumbered by government regulation.

This is quite a masterstroke of manipulation. Consider:

a) we, and our governments elected to protect us, are allowing them to get away with it

b) we’re actually paying this SVO for its surveillance devices

Who protects us from such capitalist predation? Well, it’s the Government.

There are signs that the institutions of government, both domestically and internationally, are starting a long-overdue rearguard action against these AI-based tech companies, but the SVO’s retain three powerful weapons:

The Media should be an ally is resisting this force, but the SVO’s control much of New social media, and have also starting buying up Old mainstream media.

Which leads to an intriguing twist to this story.

Hang on – The Washington Post, publisher of this forensic exposé of Amazon’s nefarious practices, is owned by none other than…Amazon founder and owner Jeff Bezos.

Does the appearance of this article in a Silicon Valley Overlord’s own publications indicate admirable commitment to editorial independence?

Or does is seem more like it a kind of trolling, an act of casual self-harm, a demonstration of mastery of the universe that proves how impervious SVO ownership of our privacy has become?